Third generation with the secret sauce

SanDisk has unveiled faster notebook flash SSDs using its ExtremeFFS technology and with a new controller, a day after attacking the netbook market.

This is what SanDisk hope will start making inroads into notebook hard drive displacement. 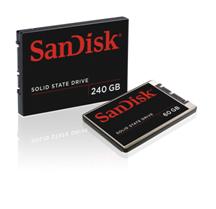 SanDisk doesn't say whether this is 2-bit or 3-bit MLC.

We have been waiting for a mysterious SanDisk third flash ingredient and so, presumably, here it is, the new controller.

Samsung has announced faster flash, its 256GB SSD having a sequential read speed of 220MB/sec and a sequential write speed of 200MB/sec. It reckons this is equivalent to a 15,000rpm hard drive. No doubt SanDisk has calculated a vRPM value for these Samsung SSDs, but it isn't revealing the result.

SanDisk says its G3 SSDs provide a Longterm Data Endurance (LDE) of 160 terabytes written for the 240GB version, sufficient for over 100 years of typical user usage. SanDisk calculates its LDE measure on the basis of a PC user writing 4GB/day to the SSD.

SanDisk says users (and corporates) can upgrade existing HDD-based notebooks with these drop-in drives. Heye is quoted thus: "Existing WinXP notebooks can be upgraded to a 60GB SSD for $149, resulting in a system that frequently outperforms a new notebook with a HDD, thereby delaying the need for large capital purchases."

It's an attractive idea, especially with Vista resistance amongst notebook users, but there is that little problem of notebooks having one drive on which the operating system, system applications, end-user applications and data files reside. They have to be copied over to the replacement SSD and then it has to be HW installed and Windows XP installed from scratch plus all of the application software, XP booted and then validated. This is not something the average notebook user may want to do at home and possibly represents an opportunity for PC channel members to offer an upgrade service.

Also Heye says "that frequently outperforms" meaning that, we might suppose, Velociraptor-equipped notebooks won't be improved. We really need greater clarity from SanDisk on candidate notebooks that will have a performance boost from fitting these SSDs. Ideally some kind of performance checking software could be downloaded from the SanDisk website. It would check over your notebook, even your PC, and say whether its performance will be boosted by one of these natty SSDs.

SanDisk has had a third-party, Web-feet Research, do a general check. Alan Niebel, a Web-feet principle, is quoted about it: "Web-Feet Research has tested the replacement of the HDDs in three year old Notebooks with SSDs and has found an improvement in boot times, application loading and general user responsiveness that, in many cases, exceeds what a new notebook with an HDD can deliver." No actual numbers though, so we don't know the amount of the improvement.

The implication of this is that these SSDs won't improve the performance of newer notebook computers, ones less than three years old. Also new notebook prices are coming down and a $499 240GB SSD upgrade cost doesn't look cheap when compared to current low-end notebooks so there is an effective capacity limitation here as well as a restriction to older notebooks. It means that the upgrade is practically restricted to notebooks three years old or more and with hard drive capacity of 60GB or less - pretty crap machines really - whose owners don't want to upgrade to a new entry level notebook running Vista.

This announcement in no way represents a threat to hard drive sales to notebook OEMs in the same way that yesterday's modular flash announcement by SanDisk represented a distinct drive into netbook flash use.

We need another one or two generations of this notebook flash before notebook HDD use is threatened.

OEM prices for the new SSDS are $149 (60GB), $249 (120GB) and $499 (240GB) and they will be available, in a 2.5-inch PATA configuration, in the middle of the year for DIY HDD replacement through purchase off the SanDisk website. SanDisk hasn't revealed any other availability information. ®