Macworld Expo Three products shown at this week's Macworld Expo - two from no-name vendors using the big stage of Macworld Expo to test their luck - attempt to provide iPhone amplification through acoustical, rather than electronic, means. Each is interesting. None is completely successful.

All three are members of that class of off-the-wall oddities that make attendance at the annual Expo mandatory for true believers in search of products that don't have tons of marketing cash supporting them. Every Mac addict may know about iLife '09, but how many have heard of SoundClip? Ampli-Phone? AirCurve? None who didn't attend the Expo.

Finding out about products such as these is what Macworld Expo is all about. It's the annual opportunity for the Mac faithful to learn about the Little Guy's offerings, and for the Little Guy to break into the big time.

But only if their products are good enough. These three are disappointing.

Each of these ostensible iPhone amplifiers attempts to work its something-for-nothing magic by exploiting the acoustic-wave phenomenon that has been used to passively enhance amplification since the earliest days of sound recording and playback.

Boiled down to its basics, acoustic wave amplification works by tuning the size of a horn or wave guide in such a way as to allow the sound waves emanating from the small end of the chamber to be reinforced as they travel down the tube and out the wide end. Picture those giant Alpine horns in a Ricola commercial, and you'll get the idea. 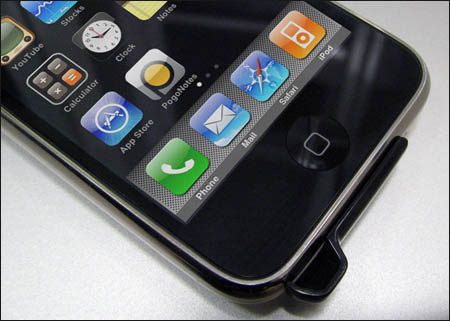 It's tiny. It's unobtrusive. It's barely effective.

The least successful of the three, the SoundClip from Ten One Design, also had the distinction of being the smallest product we discovered during our peregrinations about the two convention halls that housed Macworld Expo 2009.

The SoundClip is a 3.5cm by 0.7cm piece of black plastic that clips into the 30-pin connector slot on the bottom of your iPhone. A small micro-ladle at the end of the clip cups the iPhone's tiny speaker grill, where - according to Ten One Design - it "directs sound from iPhone toward you to increase the volume and clarity for movies and speakerphone." The tiny cup - which Ten One Design refers to as the "resonance chamber" - has been "tuned" to achieve a "frequency response that is flatter, and more natural sounding."

Or so they say.

In actuality, although the amplification is perceptible, it's minimal. Also noticeable is the promised - and welcome - flattening of the iPhone's frequency curve. Again, however, that effect is minimal.

Then there's the SoundClip's price: $7.95 for a weensy shard of shiny plastic. Peter Skinner of Ten One Design justifies that pricing by saying that "It's a relatively inexpensive accessory for what it does," and that "The benefits of it more than offset the cost."

If only those benefits were more audible. 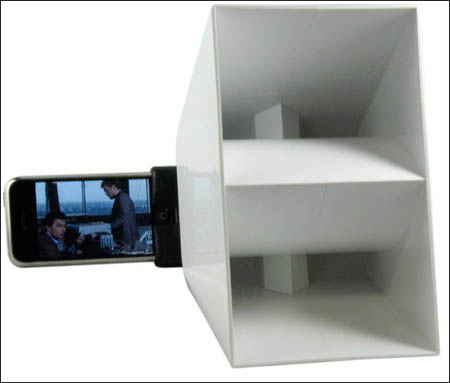 1920s technology vaulted into the 21st century - vertically or horizontally

The second passive iPhone amplifier, the aptly-named Ampli-Phone, is from the Gryphon Corporation, a manufacturer of glass-cutting tools. Robert Baumbach, Gryphon's President, says that the Ampli-Phone was a labor of love based on his passion for collecting antique Victrolas.