Hob-knobbing with the hoi polloi, fighting for your freedom. With flying penises

Comment Three flying penises, two noble Lords, and an international model downing a few glasses of white before jetting off to do a show in Israel. Absolutely not – we promise – how our beloved editor spends his weekends. Nor an advance copy of the exclusive with which the News of the World hope, this year, to cap last year’s rather unfortunate little court outing with Max Mosley.

Although John McDonnell could not be there, the two game Lords not only turned up, but braved the inevitable cheap jibes from the tabloid press by being photographed with their hands around the neck of a flying gold penis – the trophy awarded to each and every winner. 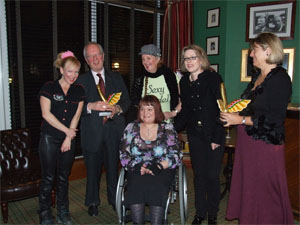 Wish you could IP Freely? What's the wording holding you back in your current job?
On-Prem3 Feb 2023 | 72