The British armed forces are purchasing innovative backpackable ducted-fan hoverbots, intending to use them for checking ahead of ground convoys on the dangerous roads and tracks of Afghanistan. 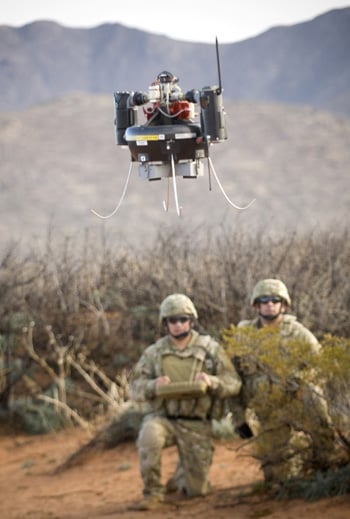 In you go, little guy - we're right behind you.

The machines in question are the well-known Honeywell Micro Air Vehicle (MAV), known to the US Army as Future Combat Systems Class 1 UAV and commercially as "T-Hawk". The little wastepaper-bin sized droids weigh only 17 pounds, making them man-portable at need. Their petrol driven ducted fans offer 40 minutes of endurance, 7,000 feet of ceiling and 45mph top speed. The latest T-hawks offer a pan-tilt camera - formerly, operators had to swivel the vehicle about to look around.

T-Hawks have seen service with US bomb-disposal units in Iraq, where they are seen as especially useful for confined urban areas where hovering is essential and more conventional mini-helicopters tend to suffer from rotor strikes against buildings. The T-Hawk's so called "hover and stare" abilities are also thought likely to be of use to other customers - the Miami-Dade police in Florida, for instance, have some on trial.

It was reported recently that the British forces will also acquire five T-Hawks. The MoD has since informed the Reg that the purchase is part of a large Urgent Operational Requirement (UOR) buy announced by Defence secretary John Hutton last October, mostly focused on new armoured and protected vehicles for use in Afghanistan. However, the package also included a £96m "route proving and clearing capability, known as Talisman ...applying technology to the challenge of transiting routes and dealing with high-risk areas".

MoD spokespersons confirmed today that the five Brit T-Hawks will be ordered as part of Talisman, confirming that they are intended primarily for checking suspicious objects and perhaps for sniffing out ambushes ahead of ground movements.

That's not to say that British troops may not find other uses for them, of course. Royal Artillery soldiers, equipped with the Desert Hawk bungee-launched battery plane, wound up employing it in a very different manner than its makers intended. Designers built the Desert Hawk for perimeter security duties, but the Gunners soon began operating them from among forward units on the ground, using the little drones as eyes in the sky for combat units.

If and when the US Army's ambitious data-networked robotic legion plans - the Future Combat Systems push - proceeds, it may be possible for individual infantry squads or soldiers to work in partnership with T-Hawks in urban combat. Troops would direct the little droids - which can largely fly themselves - using their wearable computer terminals and import video direct to their helmet monocle displays: so perhaps getting the jump on enemies lurking around corners, on rooftops, or even inside buildings.

They might then take those enemies out themselves, perhaps reaching round corners or over roof eaves with their new M25 smartshell computer-guns. Or future versions of the T-Hawk might just do the job themselves. The existing ones are far too small and lacking in lift to carry anything more than their cameras and electronics, but Honeywell describe the design as "scalable". ®