'We've got strong headwinds coming in from the North...'

Games controlled using your brainwaves are currently all the rage. But Japanese toy firm Taiyo has just announced its development of a voice-controlled helicopter. 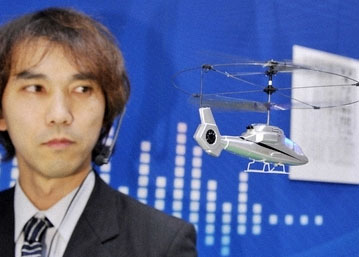 The New Hornet helicopter comes with a headset that allows the user to control the toy with a pre-set series of commands, such as “Start the engine”, “Up”, “Hold”, “Down” and “Stop”.

“Dive, dive, dive”, “Launching sidewinders”, or “You are cleared for take-off” commands don’t seem to have been included, alas.

But a traditional thumb-operated controller hasn’t been ditched altogether, because pictures show the... ahem... pilot operating the toy with one. 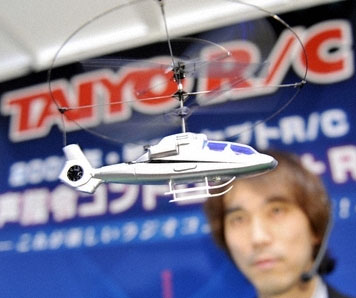 The battery-powered helicopter is about 7in long and can fly up to 10m away from the operator before crashing to the ground.