Pic A NASA radar instrument aboard India's Chandrayaan-1 Moon orbiter has sent back the first ever images of hidden crater interiors at the lunar poles. Space boffins hope to use such pictures to discover deposits of water ice, which could be invaluable for future Moonbase astronauts. 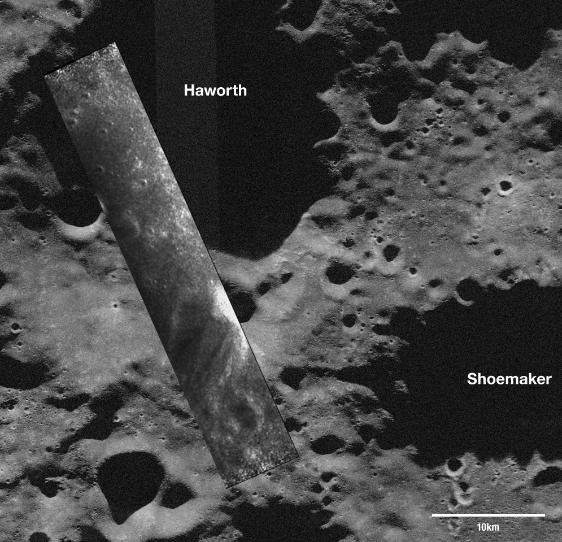 At last, a good view of the Moon's bottom.

"This is an exciting first step for the team which has worked diligently for more than three years to get to this point," said Benjamin Bussey of the Johns Hopkins University Applied Physics Laboratory. Bussey is number two boffin on the Mini-SAR lunar orbiter radar team. (SAR for synthetic aperture radar; the kit is also known as Mini-RF.)

The big craters at the Moon's north and south poles are side-on when viewed from Earth, which means that their rim walls mask the interiors. Thus the only way to get a proper look inside is from a spacecraft in lunar orbit, such as India's Chandrayaan-1.

This is the purpose of NASA's Mini-SAR package, built by the US Naval Air Warfare Center and other contributors. The Mini-SAR has just been started up, and has now sent back radar pics showing part of the Haworth crater at the moon's south pole and the western rim of Seares crater at the north pole.

NASA has released a SAR image overlaid on a radar picture from the Arecibo radar telescope on Earth (see pic). The light patches on the orbiter overlay represent "either surface roughness or slopes pointing toward the spacecraft", according to NASA.

Scientists believe that tying in Mini-SAR radar mapping with spectrography from the Moon Mineralogy Mapper - also aboard Chandrayaan-1 - will find anything of value on the Earth's satellite if it is there to be found.

There's more from NASA about the Mini-SAR here, and from the Indian space agency about Chandrayaan-1 here. ®