Bouncy Windows and other Visual Delights

I'm not a great one for GUI-twiddling, but here's a twist to the Acer Aspire One interface that I've found irresistible. And it's functional as well. Last time, we talked about the usefulness of multiple workspaces, particularly on a small-screen machine, and here's how to do them in style. You can probably get something like this going on the MSI Wind and the Eee PC too, but I haven't explored that yet, and I can't wait to tell you about this.

Lurking unused behind the AAI's Tonka Toy interface is a hugely sophisticated Window Manager called Compiz. It offers most of the functionality of, say, the Mac OS X GUI, but is much more malleable, once you know how how to get to its inner workings. And this isn't obscure command line stuff this time - the relevant levers and buttons are nicely exposed through a GUI interface that's accessible through the Desktop Menu we set up in Episode 3. 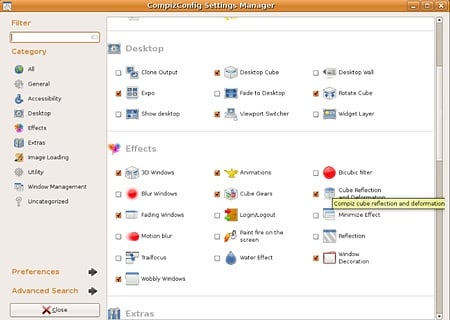 Let's start by getting Compiz running. Open a terminal and run the command compiz-manager. The script scrolls a bunch of text down the terminal - read it later to get some picture of what's happening, but for now just minimise the terminal (don't close it) and open the Desktop Menu with a right mouse-click anywhere on the Startup Screen. Pick Settings and then the CompizConfig Settings Manager option and open the General submenu. From there click on the General Options icon and then choose the Desktop Size tab.

Set the Number of Desktops to 1 and the Horizontal Virtual Size to 4. Leave Vertical Virtual Size at its default of 1. The logic of this is that we're going to emulate four separate workspaces by sliding around a virtual screen that is four times wider than our physical screen.

Now back off to the CompizConfig Settings Manager main screen and put a tick against the Desktop Cube icon. Clicking on this icon opens up a feast of options, but for now let's just accept the defaults. A couple of lines below you'll find a 'Rotate Cube' icon. Tick that too. Further down, under Effects, is a Wobbly Windows icon. It may already be ticked by default - if not, give it a tick too. You can come back later and try all or any of the other effects. But remember they're only active if Compiz is running, which is the purpose of the compiz-manager script we ran at the beginning.

Close down the CCSM and open your favorite app. Now hit Ctrl-Alt-LeftCursor (or RightCursor). You should see your original screen become the side of a cube, which rotates in the direction selected by your cursor arrow. Something like this: 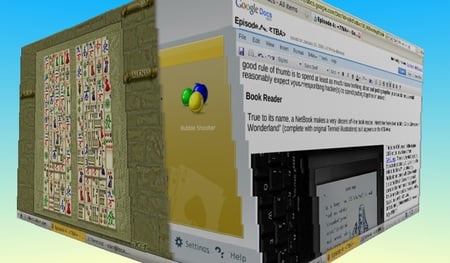 The screenshot should give you a rough idea, but ignore the Aztec-temple stepping, which is due to the cube rotation being slowed down in order to take the screen grab.

"Cube", of course, is a misnomer, because the screens forming the sides aren't square. And you can make yourself a five-, six- or whatever-sided 'cube' by adjusting the Horizontal Virtual Size of your desktop.

To make the cube appear to retreat down the z-axis as it rotates, adjust the Zoom slider in the Rotate Cube settings.

That Wobbly Windows box we checked gives the cube a seductive bounce when it comes to rest, and also adds a suggestive wriggle to any windows or menus - like the Desktop Menu - you open or move. That won't include menus you open in, say, Firefox, which are the sole responsibility of the owning application.

Next page: The Eee PC and video
Page:
Corrections Send us news
32 Comments