Deviants, perverts, 'weirdos' - who's going down?

Depending on who you believe, this will criminalise 2m individuals or a mere handful. The Register guide to surviving this law can be found here.

Meanwhile, what has become of the principal players in this drama?

On Sunday, around 100 demonstrators braved the cold and damp to attend a last-minute demo, organised by CAAN and supported by Backlash and Spanner. Peter Tatchell was out, as were fashion photographer Ben Westwood and Mr Leather UK, Paul Stag. 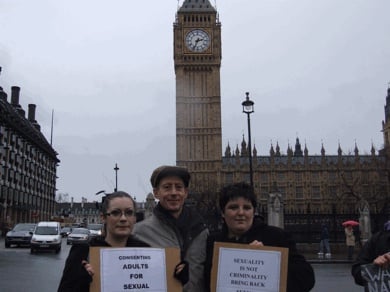 The Ministry of Justice has done itself few favours.

From day one, they have spouted the Ministerial line that this legislation merely tidies up gaps in the Obscene Publications Act (OPA). This law, they claim, "closes a loophole" - in much the same way that life imprisonment for owning a gun would close a loophole in the law on murder. For 150 years, the UK has had laws governing the publication of obscene material and has managed to get along fine without a "possession" offence.

Despite this, confusion still reigns. In the last fortnight, the MoJ has sent out diametrically opposed letters to concerned individuals. The first states that "ultimately a decision in any particular case would be a matter for the courts". The second, from Parliamentary Under Secretary of State Maria Eagle MP, repeats that the new law applies only to a "limited category of extreme pornographic material, which it would already be illegal to publish or distribute under the Obscene Publications Act".

The irony is that the MoJ may have shot itself in the foot. Criminal lawyers suggest that this public spin may provide individuals with mitigation, if not an outright defence: the possibility of a Government Minister being dragged into court to explain their advice is not entirely far-fetched.

Parliament emerges with little credit. Three cheers for the Lords who, gallantly led by Baroness Miller, put the government case under the spotlight and almost certainly won the debate hands down – although in the end, it was the abstention of Tory Lords that guaranteed the law’s passage.

This beats the record of the Commons, where public opposition fell almost single-handedly to Labour MP Harry Cohen.

Best time to prepare to leave an Oracle ULA? The day after it starts, say licensing experts

As for privacy concerns about the Topics API? We'll get back to you
Devops1 Feb 2023 | 8

ChatGPT: Please explain the difference between 'token efforts' and 'putting the genie back in the bottle'
AI + ML31 Jan 2023 | 6