Few would disagree that the games industry is a colourful business. But it looks set to become even more so, thanks to Sony’s creation of four colourful PlayStation Portables - and, potentially, a redesigned Xbox 360 from Microsoft. 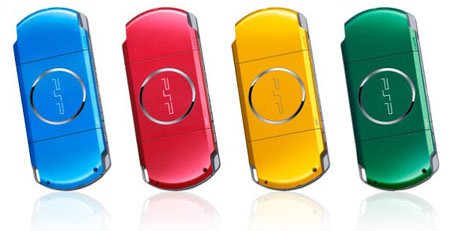 The “Carnival Colours” collection gives gamers the choice of a “vibrant blue”, “radiant red”, “bright yellow” or “spirited green” body for the PSP-3000, which was unveiled back in August.

Each colourful model is sold in a standard pack that includes one 1200mAh battery and an AC adapter.

Alternately, you can splash out on a value pack containing a 4GB Memory Stick Pro Duo card, a wrist strap and console pouch, both of which will match your chosen colour.

If you’re more of an Xbox 360 fan then word from a mole who spoke to website Ars Technica is that Microsoft is set to paint its console red as part of a special Resident Evil 5 bundle pack.

Aside from the red console, the pack’s also rumoured to include a red controller, a copy of the game and a Resident Evil theme for the New Xbox Experience.

Since Microsoft’s yet to confirm the bundle pack, a launch date or price is still unknown. ®