Texas-based boffins say they have figured out a cunning new method of dealing with America's nuclear waste, using fusion technology - which at the moment can't produce power - to turn 99 per cent of fission reactors' waste into useful energy.

"Most people cite nuclear waste as the main reason they oppose nuclear fission as a source of power," says Swadesh Mahajan, nuke scientist at Texas Uni. He might be wrong there - the roots of the antinuclear movement very frequently lie in opposition to nuclear weapons - but there's no doubt that waste is a major concern.

In particular, the cost of long-term waste storage accounts for a major proportion of the price of fission-generated electricity. 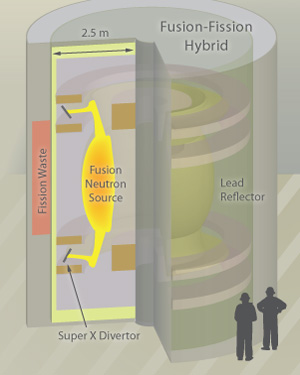 But the Texas Uni boffins reckon that high-level nuclear waste is actually a major resource, handled in the right way. Countries such as France and Japan already reprocess and re-use some of their waste, but America doesn't: which is one reason why the US has such a large waste stockpile.

The first step, according to Mahajan and his colleague Mike Kotschenreuther, is to use the waste again in America's 100 light water reactors (LWRs), so generating large amounts more energy. This will reduce the waste volume by three-quarters, leaving a final 25 per cent of transuranic high-level waste which can't be made to fission by the level of neutron radiation found inside a normal reactor* - rather as the heaviest fractions of crude oil are very difficult to burn. The Texas boffins refer to these wastes as "sludge".

But highly radioactive waste can't be used for road tar as heavy hydrocarbon fractions are - it needs to be expensively stored or ideally got rid of, by breaking it down through fission into smaller atoms.

To do this, it needs to be blasted with neutrons, even more vigorously than it already has been in the LWRs.

"To burn this really hard to burn sludge, you really need to hit it with a sledgehammer, and that's what we have invented here," says Kotschenreuther.

That's where the fusion tech comes in. Tokamak fusion reactors are excellent for emitting lots of neutrons - their downside, so far, is that sustaining the ring of neutron-spraying plasma inside the tokamak doughnut requires more energy than the fusion reaction gives out. As a result, such reactors are currently only used for research.

Kotschenreuther and Mahajan, however, propose putting heavy transuranic "sludge" around a specially-pimped tokamak, fitted with a "Super X Divertor" allowing the neutron emissions to be cranked right up without destroying the containing doughnut. The neutron blitz would hit the surrounding heavy wastes, fissioning them and yielding energy, though the tokamak would be using energy up.

The scientists aren't yet going firm on whether the hybrid fusion/fission reactor would be a net user or generator of power, but seem sure that if it does draw juice overall it won't be much compared to that generated at the LWR stage of the process. Also, it would be cheaper than storing the wastes.