US weaponry'n'aerospace companies have announced the first flight testing of an Apache attack helicopter equipped to act as flagship to an accompanying fleet of robotic unmanned kill-choppers. 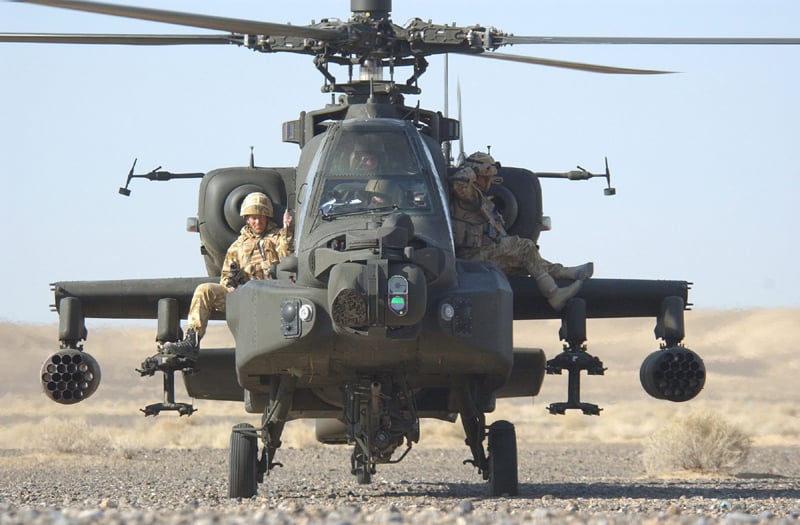 Brit Apaches are never seen without their radars in public.

The add-on in question is the Longbow Unmanned Aerial Systems Tactical Common Data Link Assembly (dubbed UTA), which is fitted to the chopper's rotor mast above the blades - where some Apaches carry a targeting radar. According to to the Longbow joint-venture firm which makes both the radar and the datalink module:

The LONGBOW UTA is a two-way, high-bandwidth data link for Apache aircrews that allows sensor and flight path control of unmanned aerial systems (UAS). UTA-equipped Apaches enable aircrews to exercise control of UAS at long ranges and receive real-time, high-definition streaming video on their multi-function displays. The UTA is fully integrated [with the Apache's own sensors] to provide the highest quality day or night imagery to other air and ground platforms.

Longbow LLC is owned by US defence giants Lockeed and Northrop. The allied weaponeers say that a datalink'd-up Apache in a "recent" test flight was able to not only receive video from but take control of an unmanned "Little Bird" helicopter. The Little Bird, despite the name, isn't some puny pissant model-aircraft type of thing. It is normally manned, and used by the US spec-ops community to get small teams of operatives in and out of tight spots - or as a pocket gunship, armed with rocket pods, gatling miniguns and/or Hellfire missiles.

Apaches already in service are equipped to receive video from other aircraft, but the new UTA allows Apache crews to actually take control of robocraft. Apart from robotised Little Birds, this could include Fire Scout drone-choppers, able to pack a variety of sensors or deadly weaponry: or perhaps fixed-wing machines, networked multipack cruise missiles or goodness knows what else.

Apache crews of the future, indeed, might choose to simply set down on a suitable hilltop so as to have good comms with their unmanned escorts and let the robots take the strain.

One might ask, indeed, why the UTA datalink couldn't be put in some relatively dull aircraft, sitting safely high above the battlefield. It's probably fair enough not to put it back in the actual US of A for now - the strain on satellite bandwidth caused by that sort of thing is already a serious problem. But it is a little puzzling in some ways to find the robot command node aboard a helicopter which is designed to be in the thick of the fight itself. The design philosophy is perhaps a bit Cold War - the skies might not be under friendly control, so the Apache and its accompanying droid flotilla might be cut off from their own commanders, or anyway have limited bandwidth back to them.

It seems certain that British Apaches won't be getting UTA capability any time soon, anyway. The British fleet, unlike the US one and other countries', has a mast radar for every Apache - a fact that is often raised as a response when people ask why the British ones cost about four times as much per bird as all the others*.

People then started pointing out that in the actual war in Afghanistan nobody flies Apaches with the radars fitted, owing to the copter-unfriendly "hot and high" conditions there and the resulting need to reduce weight. As a result, an embarrassed MoD reacted swiftly. Brit Apaches have now been ordered to fly with radars fitted at all times, despite the general lack of any enemy tanks to detect with them.

As the Brit birds have somwehat more powerful Rolls-Royce engines*, it's usually possible to carry some weapons too: though the choppers are generally unable to hover with full fuel even in ground effect, and have to make rolling takeoffs. Loyal British commanders, however, insist that the other countries wish they had to carry their radars too.

Anyway - it's pretty plain that under the "no one must doubt that those extra radars were worth every penny" diktat, UK Apaches will never be allowed to fly without them - hence will never have space for any UTA robocommand packages. Which, depending on how useful the UTA turns out to be, is either good or bad. ®

*The real reason that our Apaches cost so much is neither the extra radars nor the Rolls engines. It is that we set up our own assembly line to build just 67 aircraft, as opposed to buying straight from the US factory which has made about a thousand. We set up our own line so as to preserve jobs at the AgustaWestland plant in Yeovil. The added cost of doing so was conservatively a million pounds per UK worker saved from the dole queue.