Imperceptibly tiny news from the world of nano-publishing today, as a new record has been set by American scientists for exceedingly small writing. Boffins at Stanford University say they have managed to write "SU" in letters smaller than atoms.

"We ended up with the smallest writing in history," says Hari Manoharan, Stanford assistant prof. 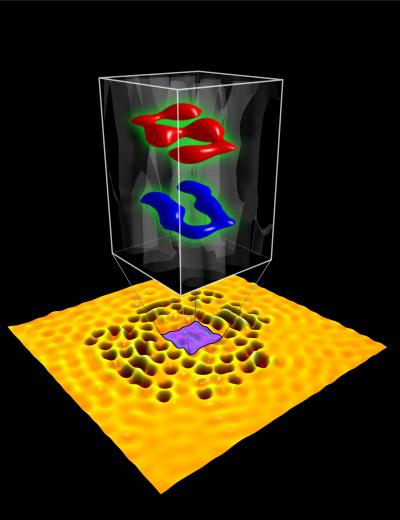 The letters were written by using a scanning tunnelling microscope in a vibration-proof basement lab to arrange carbon monoxide molecules on a copper sheet. This produced a sort of pinball table for electrons, in which they bounce about - occasionally flip-flopping between particle and wave form in typical capricious subatomic style. This produces standing interference patterns which can be varied by changing the design of the molecular carbon monoxide bumpers on the copper pinball layout.

According to the Stanford boffins, these electron patterns can act as holograms, storing information. Even better, a given layout can actually store many holograms, each to be read at a different electron wavelength. Manoharan and his nanohologram collaborator Chris Moon say it's difficult to properly express the size of their stacked S and U, but the equivalent would be 0.3 nanometres. This is sufficiently small that you could copy out the Encyclopaedia Britannica on the head of a pin not just once, but thousands of times over.

That has apparently snatched back the smallest-writing record for Stanford, which it lost to a group of IBM boffins who wrote their corporate initials in xenon atoms back in 1990. But huge clumsy xenon atoms are old hat, now - it's all about the new electron pinball nanohologram hotness. Manoharan and Moon believe that this science has broken down the barriers of information storage.

"In this experiment we've stored some 35 bits per electron to encode each letter," says the prof, "and we write the letters so small that the bits that comprise them are subatomic in size. So one bit per atom is no longer the limit for information density. There's a grand new horizon below that, in the subatomic regime. Indeed, there's even more room at the bottom than we ever imagined."

There's a layman's-level vid on YouTube, here, for those who'd like to know more and have vid-friendly networks:

Or for those who take their hard sums straight and have a subscription to Nature Nanotechnology, Manoharan, Moon and their co-authors have published a paper titled Quantum Holographic Encoding in a Two-Dimensional Electron Gas here (doi:10.1038/news.2009.54). ®