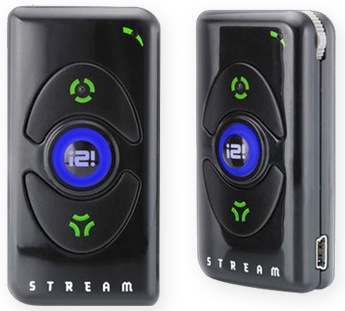 In the starter pack, you get two Stream modules, two 30cm and two 70cm 3.5-2.5mm audio cables, two USB cables, two pocket clips and two neck lanyards. The only things really lacking are RCA-to-2.5/3.5mm audio cables but since you can pick those up for a lot less than a fiver, we won't hold that against i2i.

The Stream modules themselves take the form of plastic boxes measuring a matchbox-like 60 x 30 x 15mm and weighing around 60g. At the top of each module is a 3.5mm audio output socket while at the bottom is a 2.5mm audio input. On the right side sits an on-off-volume rocker control and a mini USB port for charging.

On the front of each module are the three main controls: the top one sets the module to transmit, the bottom one to receive, while the third, central button lets you select one of seven colour-coded operating channels.

Somewhat annoyingly, the central button rattles about in its housing which makes the modules sound and feel a bit on the cheap side, though they seem well enough stuck together. According to the technical data that i2i supply, the Stream transmits uncompressed 48kHz, 16-bit audio over the 2.4GHz frequency band. Total harmonic distortion is quoted as less than 0.007 per cent and audio latency as less than 20 milliseconds - i2i calls this “HD Quality Audio”, but since its spec is only slightly above CD's 44kHz, 16-bit quality and a lot less than the 24-bit, 192kHz you can get off DVD Audio, we think the use of the initials 'HD' is more about hopping on bandwagons than real high-definition audio. 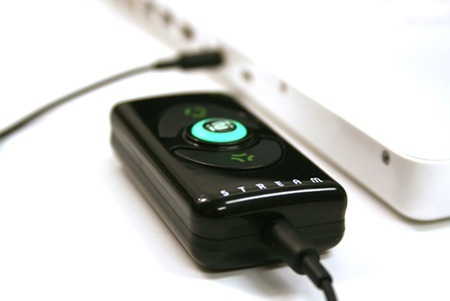 No streaming while charging

Anyway, it all sounds hunky-dory for CD listeners, but does it work? Well, in a word, yes.