Will Apple's next iPhone pack an Nvidia ARM-based system-on-a-chip? That's what one US analyst thinks.

Freedman goes on: "We believe the next OS supported will be company-specific, leaving us to believe it will be either Research in Motion or Apple.

"Should we have to pick between the two we would favour Apple support as a building block of Tegra is from PortalPlayer, a past supplier to Apple iPod products." 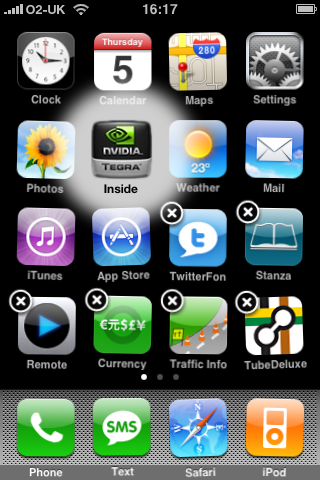 Apple has certainly been cosying up to Nvidia a lot of late, in particular buying in the chip maker's GeForce 9400M integrated chipset for MacBook laptops. It's also been claimed - though not confirmed by either Apple or Nvidia - that the next Apple TV could be based on Nvidia's Ion platform. Ditto a revamped Mac Mini.

At launch, Nvidia said Tegra-based devices would debut "late 2008", but as yet no one has come clean and confirmed they'll be using the part. Freedman believes at least one, "an upcoming Microsoft smartphone with a Qualcomm baseband", will be announced in a couple of weeks at Mobile World Congress (née 3GSM), while handset maker HTC is the second of two Tegra-backing vendors he's tagged.

Register Hardware will be at MWC to bring you all the details. ®