Apple iPhoto gets in your face

You look great. It's getting old

Review iLife has arrived. Again. And there are questions to be answered.

Is this five-app pack of ease-of-use worth $79? Are the hyper-hyped new capabilities of its two marquee apps, iPhoto '09 and iMovie '09, all they've been cracked up to be? Is the new Learn to Play feature in GarageBand '09 useful for anyone other than a musical noob? Do iWeb '09's new widgets make it finally worth using? And is iDVD '09 really necessary?

As with any tool more complex than a rubber doorstop, the answer to these questions is: "It depends."

On January 6, Apple announced the latest version of its consumer-level creativity suite, iLife '09. And on January 27, it shipped. Since that day, we've toyed with every button - or thereabouts. And here's what we think. 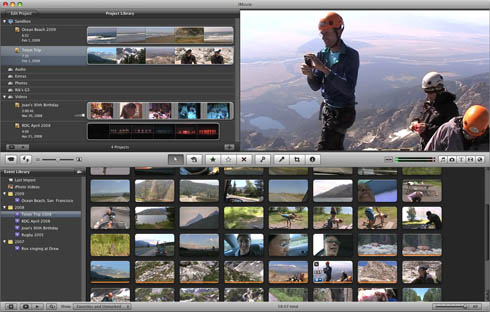 iPhoto is an increasingly competent photo organizer, but no substitute for true photo-editing software. iMovie will let you easily slap together a quickie video, but it's a toy compared to Final Cut Express - let alone Final Cut Studio. GarageBand is surprisingly powerful deep inside its editing innards, but we defy you to use its Magic GarageBand Jam with a straight face. Finally, iWeb is serviceable if you're terrified by a href, and iDVD is about as complex as that aforementioned rubber doorstop.

Let's start with iPhoto '09, then work our way through its compatriots in later postings.

Growing old, but not gracefully

Before there was iLife, there was iPhoto. iLife - which was first a bundling of iPhoto, iMovie, and iDVD - didn't enter the Mac pantheon until January of 2003. iPhoto first appeared in January of 2002.

iPhoto is now in its eighth iteration - if you choose iPhoto > About iPhoto from the menu bar, you'll be informed that iPhoto '09 is actually version 8.0. And it's not aging gracefully. 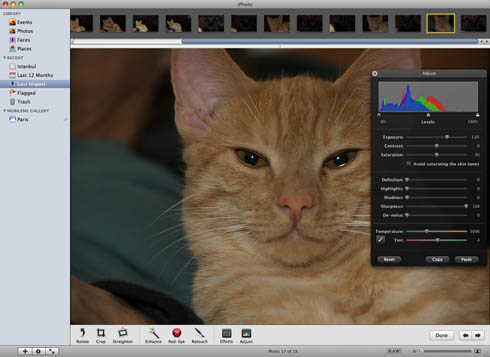 iPhoto works well, but is beginning to feel like a bit of a kludge

These ongoing upgrades have given this latest version the distinct feel of an app that has accreted rather than matured. The look, feel, and function of new features are more mature - or, at least, different - than those of older features.

For example, Faces and Places, the stars of iPhoto '09 (more on them in a minute), have a distinctly more modern look-and-feel than do older features such as keyword tagging.

Unlike iMovie '09, which contains new features that appear to have been planned before the all-new iMovie '08 was ever released, iPhoto '09 is a hodgepodge of legacy and innovation. And sometimes the old looks, well, old next to the new.

But some of that new stuff is quite impressive.

Before you can get to the iPhoto's new goodies you must, of course, install iLife '09. Installation is straightforward, but be forewarned that you can only install the suite on the same volume upon which Mac OS X is installed and running. If you want it to reside on a drive other than your main boot drive, you'll need to install Mac OS 10.5.6 on that drive, and boot from it.

Yes, we did say Mac OS 10.5.6 - iLife '09 won't run on earlier versions of Mac OS X. Being a multi-app media suite, its list of system requirements is complex, but suffice it to say that iMovie has the steepest requirements in general, and GarageBand's Learn to Play feature requires an Intel-based Mac.

After about 10 minutes of progress-bar crawling, our installation was complete, and true to Apple's annoying habit, all three of our test Macs' Docks were stuffed with iLife icons after installation. Apple, could you please offer a toggle that would allow us to skip the step of having to drag-and-poof all of those icons out of the Dock to keep our Docks pristine?

Next page: Getting in your face
Page: