A security lapse at Kaspersky has exposed a wealth of proprietary information about the anti-virus provider's products and customers, according to a blogger, who posted screen shots and other details that appeared to substantiate the claims.

In a posting made Saturday, the hacker claimed a simple SQL injection gave access to a database containing "users, activation codes, lists of bugs, admins, shop, etc." Kaspersky has declined to comment, but two security experts who reviewed the evidence said the claims appeared convincing.

"This looks very real to me," Thomas Ptacek, a researcher at security provider Matasano said via instant message a few hours after the post went live. He pointed to the address bar of one screenshot that showed usa.kaspersky.com along with the text "concat_ws(0x3a,ver" to the right of that. "It's a URL that is being used to alter the database request that's used to generate the page," he added. "One of them can be tricked into pulling arbitrary data from the database. Game over." 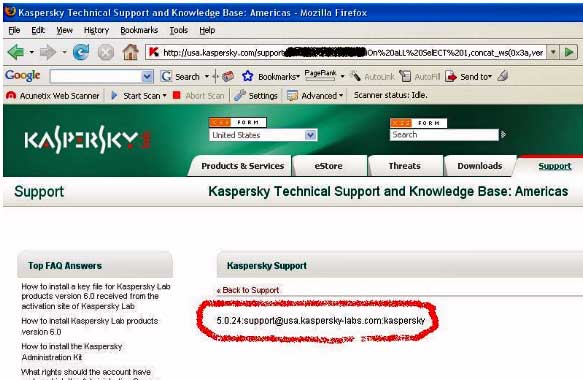 "Given the hour, we are not able available to talk now, but I will work on answers for you to have early tomorrow," a spokeswoman wrote in an email sent Saturday evening California time, several hours after the post was made.

It claimed that a simple modification of a URL exposed the site's entire database. "Alter one of the parameters and you have access to EVERYTHING: users, activation codes, lists of bugs, admins, shot, etc." The screenshots showed the attack was focused on Kaspersky's technical support and knowledge base for the Americas. It included the names of more than 150 tables.

The URLs were edited to redact the page's vulnerable handler, but tools that are easy to come by could help anyone who knows how to use them to identify where the SQL injection weakness is located, Ptecek said.

Assuming the hack is for real, it wouldn't be the first time a Kaspersky site has been hit by a SQL injection attack. In July, Kaspersky's Malaysian site and several subdomains were defaced by hacker who left pro-Turkish slogans. According to ZDNet's Zero Day blog here, Zone-h archives show 36 website defacements of international Kaspersky sites since 2000.

This breach appears to be more serious because it potentially exposes customer information and could also open Kaspersky's site to other types of abuse, security experts said.

"I hope that Kaspersky administrators fix this vulnerability rather quickly as they no doubt have a large customer base, and it would appear that all those customers are now exposed," Gunter Ollmann, the chief security strategist at IBM's Internet Security Systems blogs here.

"On top of that, this type of critical flaw can probably be used to usurp legitimate purchases and renewals of their products - which could include the linking to malicious and backdoored versions of their software - thereby infecting those very same customers that were seeking protection from malware in the first place."

Stay tuned. The Register will be updating this story as warranted. Please contact us here if you have intelligence or insight into this story. ®