China's crackdown on internet pornography and "lewd" content on the web has claimed another 276 websites, the government said on Tuesday, bringing the total number of websites closed to 1,911. 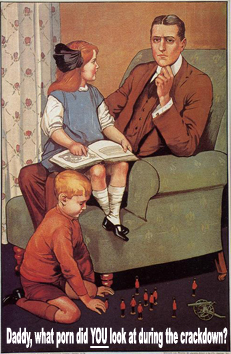 Although officials say they've made "notable progress" in cleansing the internet of smut and pesky dissenting political voices behind its Great Firewall, an unnamed official told the Xinhua new service — believe it or not — some folks are still finding ways of getting around the anti-porn regime.

The official stated that many sites have sidestepped government warnings by changing the offending website's URL or simply the page's appearance.

Even major sites like Google China and Baidu have been pressured to publicly apologize for being too slow to remove links to pornographic materials.

Includes the usual stuff about not selling weapons, adds wording about tech, data, and reciprocity