Part 2 Apple’s Apple TV set-top box supports all the audio and video file formats that iTunes, iPods and iPhones can handle. That’s plenty for many folk, but for those who favour less mainstream formats or widespread ones that Apple’s not keen on — DivX, for one — it severely limits the value of the machine.

Fortunately, once the Apple TV’s sealed system has been opened for access — as we detailed last time — it’s surprisingly easy to increase the number of codecs the machine has access to. 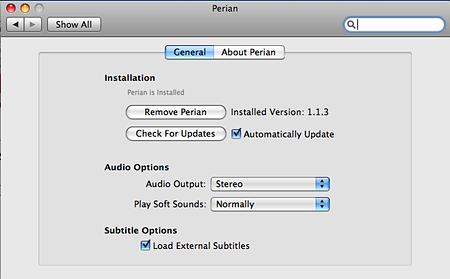 The bottom line: if Mac OS X can be loaded with new codecs, so can the hacked Apple TV. It is, after all, an Intel-based Mac in its own right, and almost all of the free tools available to Mac users can be installed on the set-top box.

That naturally favours the Mac as the platform on which to work when modifying the Apple TV’s system software. More than anything, that’s because most codecs are supplied by the now-standard Apple .DMG disk image format. These can be opened on Windows and Linux PCs — see ‘Mac DMGs on Windows’ on the next page — and once that’s achieved, grabbing the necessary files is merely a matter of navigating a directory structure.

Undoubtedly, the best source for Mac-compatible video codecs is Perian, which plugs a host of formats into Apple’s QuickTime infrastructure. You can find a full list of supported codecs and media containers that Perian knows how to deal with on its website, but it’ll handle .FLV, .MKV, .AVI, DivX to name but four. 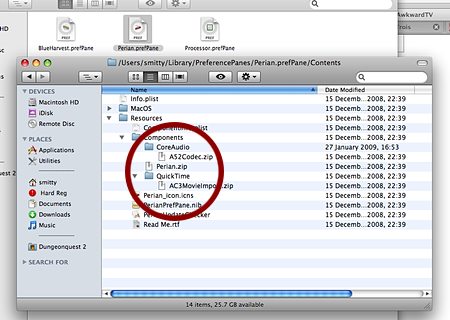 The key files in the Perian .prefPane folder structure

Once you’ve downloaded and mounted the Perian .DMG disk image file, the crucial elements are stored in Perian.prefPane, presented by Mac OS X as system preferences panel, but essentially a folder. Inside it, within the /Contents/Resources/Components folder, you’ll find Perian.zip. Copy this, along with the contents of the two accompanying folders, CoreAudio and QuickTime, to the desktop and unzip the files. You’ll end up with

three files that need to be copied to the Apple TV using your SFTP client then moved to the correct locations on the box and assigned the correct file ownerships: