The iPhone and iPod Touch each generate more web traffic than any other handheld device.

That's according to new figures by the advertising firm Admob, which measures online traffic based on ad requests. Its January metrics place Apple's iPhone and its derivative non-Phone device in the first and second spots for internet users worldwide.

The iPhone leads with an 11 per cent share of total handheld web usage. Although the iPod Touch follows with 7.4 per cent, the amount of web traffic measured as coming from the device is growing much faster than the iPhone compared to last month.

Motorola's RAZR V3 is the third most internet-savvy handset, with 3 per cent of worldwide traffic counted by the firm. Nokia's N70 is ranked fourth with 2.5 per cent of total ad requests. 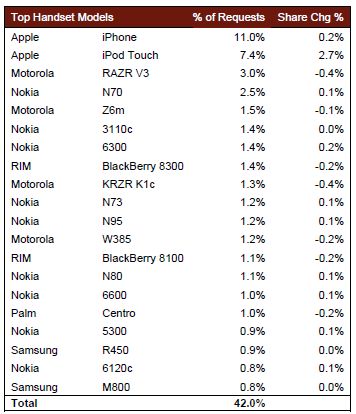 Broken down into regions, the public's taste for browsing with Apple is a constant in both the United States and United Kingdom. The third most popular device in the US is the RAZR V3, while across the pond the number three device is the Nokia N95.

Of course, the US numbers make up 43.4 per cent of Admob's total requests, so in the grand scheme of thing, the UK figures (3.7 per cent) come out in the wash.

On a company-by-company basis, although Apple's two devices dominate the swimsuit portion of the competition, Nokia takes the total web traffic tiara. The mobile maker's catalog of phones is responsible for 30.1 per cent of Admob's total worldwide requests. Apple devices come in second with only 18.3 per cent of ad requests total.

Motorola, SonyEricsson, and Samsung are in a horse race for third place, with 9.9 per cent, 9.8 per cent, and 9.6 per cent of total ad requests.

You can check out Admob's full report on mobile traffic here. ®

It's June, and you guessed it! Pork barrel time for resellers as £500m public sector framework gets go-ahead