'You're Goths, and you can't serialise my next book'

FoTW George Orwell called advertising "the rattling of a stick inside a swill pail". What would he call the business of writing advertorials about Twitter, and other Web 2.0 hypes, then?

Answers on an email, please. But we're honoured to have D-list Shoreditch New Media celeb and serial-Twitterer Paul Carr for this FoTW.*

This one starts gently, then heats up nicely.

I'm sure a billion people have emailed about your Twitter piece, but you know the number you quoted is a tiny percentage of the total raised, right?

This is getting quite interesting -

> you know the number you quoted is a tiny percentage
> of the total raised, right?

And you would know that if you'd read the piece carefully: It's really clear that the number quoted is for twestival.fm, a subset of a bigger event. Reg readers had no problem seeing this, but Twitter users (including yourself) didn't.

So what accounts for this? Do you think Twitter users have poorer reading abilities, or lower cognitive functions? Or do they simply go by what the herd is saying, without Reading TFA? Or are they just being emotional (the "group" is attacked - attack back!) ?

The options are not mutually exclusive: if someone is a bit thick, they may be more likely to take comfort in letting the Crowd make their mind up on their behalf.

Sorry, Andrew, that's bollocks. "Really clear"? I'm not denying you said the figure came from twestival.fm but the headline, subhead, thrust of the piece and link to the Day Today jam festival thing all made it clear you were saying that Twestival was a disappointing failure. It simply wasn't.

A group of unpaid volunteers used social media to create a global event that has already - before anything like the final total has been counted - raised a six figure amount to provide clean water to some of the world's poorest people. Your response to that was sneering and deliberately skewed to prove your point.

I emailed you as a professional courtesy because I wanted to give you a chance to say, "yeah, shit, I suppose I was a little hasty. I just don't like Twitter very much, but taking a pop at a successful charity event to make my point was a bit lame. I'll edit the piece to clarity that the total raised was much higher."

But instead you accused me of being unable to read, and then lumped all Twitter users together into one idiotic herd-like mass who are inferior to all of the Register readers who - as one mass - understood the brilliance of your piece and commented accordingly.

As I say, I was offering a professional courtesy before I write my column on Tuesday tearing you and the Reg new one, and you've responded by calling me an idiot.

Paul then Twittered the perceived insult in real-time to the Twittersphere. Can it get any more exciting? 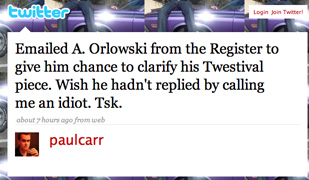 > and you've
> responded by calling me an idiot.

The ability to take distance yourself from an idea, and to discuss it coolly and rationally, is a sign of emotional maturity. Construing something as a hostile personal attack suggests you've lost that vital critical distance.

Paul, you don't strike me as a stupid person - you're a funny writer, but you do have a tendency to pander to your peers. You've done it before with blogs, and now you're doing it again.

I'm guessing like many Outraged Twitter Users you didn't RTFA closely. Of course, it's possible you did read it, but decided you would have better column material if you went with the Twitter version of reality.  Getting outraged is very predictable, but it means you're failing to explore the real story with the wider readership.

One thing this approach misses out is the sociological aspect - isn't this group mentality is the most interesting part of such phenomena? My point of writing about Twitter specifically is because it's a great example of a closed cybernetic feedback loop.

> who are inferior to all of the Register readers
> who - as one mass - understood
> the brilliance of your piece and commented accordingly.

Er, no. Before you make a total chump of yourself, I've been correcting people who think Twestival.fm is the totally of Twestival in the Comments. There just aren't very many.

But I suspect you won't let facts get in the way of a good rant - if it earns you the peer approval you seem to crave.

Dear me Andrew - peer approval I crave? Group mentality? The last people I met who were so obsessed with the evils of popularity were the kids at school who didn't have any. You're like the goths of web 2.0.

But my real question is why you are banging on about Twitter and the people who use it? I don't give a shit if you think everyone on Twitter is frightful - including presumably Charlie Brooker who is a collaborator with the guy who wrote the clip you fanboyishly used to make your - er - point.

My gripe is about your coverage of Twestival and the people who very successfully organised a charity event only to have their hard work and success shat on by someone who wouldn't let the facts get in the way of a good rant.  You took your lack of understanding of Twitter out on good people who, I'll wager, have collectively done a hundred - maybe a thousand - times more for charity this year than you have. Correcting people in the comments is as cowardly as publishing a tabloid apology on the bottom of page twenty-nine, and you know it. You should be fucking ashamed of yourself.

I'm sorry you find my writing pandering and emotionally immature. I assume next time I publish a book, The Reg won't come asking to publish any more of it.

Splendid stuff. Twitter reminds me of the the early days of blogging - when people were so pleased with themselves simply for being there, they became very tribal, and infantile.

Apparently because El Reg makes fun of Twitter, we're also a "bunch of aggro loner twats", according to The Guardian's Jemima Kiss. But alas, Jemima was Twittering, not emailing, so it doesn't qualify as a FoTW.

Now there's a really great explanation for the media's current Twitter stupidity, and we'll be going into it more later this week. For now, check out James Harkin's excellent new book Cyburbia to see how Web 2.0 feedback loops are nothing new.®

* The original version of this piece might have been read to imply a commercial relationship between Paul Carr and Sarah Lacy. Paul did approach us last year with a suggestion that we might care to serialise Sarah Lacy's book, but - as was clear to us at the time - he did so only as a favour. We're sorry for any implication to the contrary. Paul adds that it's only Andrew, not the whole of the Reg who is "the goths of Web 2.0." Which disappoints us - must try harder.