Senior Royal Navy aviators have said that the successor plane to the famous Harrier jumpjet will probably not land vertically on British aircraft carriers. Rather, the F-35B "Lightning II" will employ the "Shipborne Rolling Vertical Landing" (SRVL) technique as routine: it will be a running-jump jet, as it were. 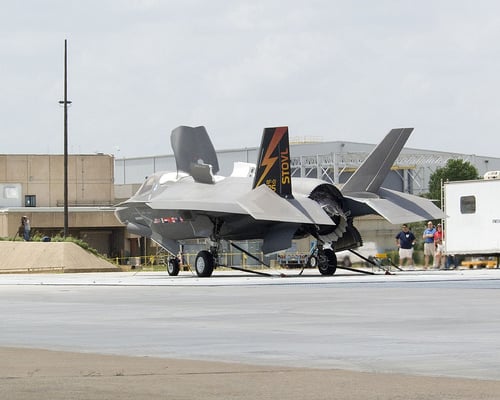 Man, now we need another acronym.

Rear Admiral Simon Charlier, head of the Fleet Air Arm, said that it would probably not make sense to train pilots in both the straight-down and SRVL methods of landing on a ship.

"I think we'll find it makes sense to train just for the rolling landing," he told the Reg today.

The Ministry of Defence is known to have expended significant effort by MoD boffins and test pilots on developing the SRVL idea, having carried out trials using a Harrier aboard the French carrier Charles de Gaulle.

The Royal Navy is particularly interested in the idea, as it will need to use its future F-35Bs as air-to-air fighters as well as strike planes. The concern regarding a normal vertical landing as employed by the existing Harrier force is that the fighter needs to be able to fly a routine patrol fully armed and land back on the ship without dumping weapons.

The F-35B, then, will need to be able to land on a ship - often in hot weather, when jet engines lose thrust - still carrying two hefty AMRAAM missiles and a safe minimum of fuel. The late, great Sea Harrier could only manage this in cold northern waters, hence its recent retirement. The F-35B, the world's first supersonic stealth jumpjet, has yet to show just how good it is at hovering in proper flight tests, though it has flown as a normal runway jet.

With an SRVL part-vertical, part-rolling landing, the F-35B would still make use of its central lift fan and swivelling engine exhaust. However it will also gain some extra lift from the wings, as it will still be moving forward.*

According to naval sources, this will not only let the jet bring back a heavy weapons load, it will also mean less wear and tear on the engine. Jet engines deteriorate much faster when run at high power owing to the huge internal temperatures involved, so large amounts of maintenance (and therefore money) can be saved by avoiding this.

"You're burning up the engine much less [with SRVL]," a senior Harrier pilot told the Reg today.

According to Admiral Charlier, vertical and SRVL deck landings are both easier to accomplish - and thus easier to train pilots for - than landing using arrester wires and tailhooks as the US and French navies do.

Nonetheless, the RN is struggling to keep any substantial number of pilots qualified for vertical deck landing on the Harrier at present, owing to extended landbased operations in Afghanistan. Such training pressures will probably mean that the F-35B pilots of the future - who will be required to keep polished a large array of skills - will have time to stay qualified in just one deck-landing method rather than two.

Of the two, it appears that the RN's preferred method is SRVL, and this will thus become the normal means of landing on a British carrier.

Assuming the future-carriers project survives, something which remains in doubt, the Royal Navy will become the world's first running-jumpjet force. ®

*This trick is already used when taking off. Harriers are properly speaking not VTOL (Vertical Take Off and Landing) aircraft, but STOVL (Short Take Off and Vertical Landing). There was a time when you were supposed to say V/STOL. It's normal to use wing lift - perhaps helped out by a naval "ski-jump" launch ramp - to get airborne after a short roll with a full fuel and weapons load, and then having dropped weapons (and burned or dumped fuel) come in to land vertically supported entirely by jet thrust.

There was confusion among senior officers today as to exactly what SRVL stood for - consensus favoured either Shipborne or Short Rolling Vertical Landing. Presumably the new combination acronym reflecting RN carrier ops will be something horrible like STOSRVL or STORVL or something.

2021 maturity deadline gets GAO hot under the collar