Java ME a safer bet?

Just like Gaudí's work, there's something wavy, colorful and even surreal about Sun's shining new hope for Java. I've never seen such a show of strength mixed with this much diffidence. Sun is evidently desperate for developers to like JavaFX.

Consistency of message, though, is not Sun strong point. Here it claims there exists 2.1 billion Java-based handsets, but here it's gone for 2.6b billion, adding that eight out of 10 cats, sorry handsets, shipped in 2008 were running Java technology. That's a discrepancy of some 500 million mobile phones.

But whichever data you subscribe to, it's a compelling notion that a brand-new, graphically oriented scripting language could have this kind of installed base already at launch.

Momentously, Sun has offered JavaFX 1.1 plug-ins for both Sun's own NetBeans platform and rival development ecosystem Eclipse. But there's still no sign of a GUI editor anywhere. Major lack of kudos to Sun until this vital component, which should have been there from the beginning, eventually arrives.

NetBeans does at least provide a Mobile Emulator, with two sample devices pre-installed: an FX Phone and an FX Touch Phone. The latter emulator is shown in the screenshot below, rotated counterclockwise - shades of iPhone envy there from Sun, methinks. 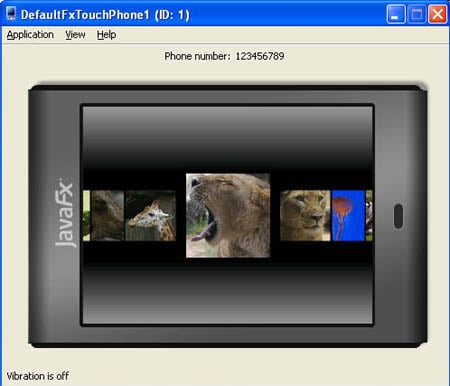 Another mobile demo impressively shows how Java Micro Edition (Java ME) now provides access to your mobile phone's accelerometer. Developers will soon be swinging their phones like Wiimotes while the garbage collector stutters to catch up.

To achieve this, the demo delves into the javax.microedition.sensor package, viz the following JavaFX code:

And then the function to get acceleration data (called by a Timeline every 100ms) is as simple as this:

This is a good example of how JavaFX gains much of its power by leveraging the underlying Java software stack. Other underlying phone features are similarly exposed, such as address book, Bluetooth, camera, messaging, location, and payment.

JavaFX Mobile apps will, in theory, run on existing Java ME phones, but will require an initial download of the new platform libraries. Sun, though, has been aggressively partnering with a number of handset, carrier and mobile software partners, including LG and Sony Ericsson - though notably not yet Nokia or Samsung - to preinstall the libraries on new phones.

A major criticism of Java ME has always been the fragmentation. It's never been possible to simply write a Java ME midlet, test it on a few phones, and safely assume that it'll therefore run everywhere. Hacks and workarounds need to be factored in for pretty much each model you want to support.