NASA's Fermi Gamma-ray Space Telescope's has captured a hi-res image of a gamma-ray burst boasting "the greatest total energy, the fastest motions and the highest-energy initial emissions ever seen".

The explosion, known to its chums as GRB 080916C, was detected on 15 September last year in the constellation Carina at a distance of 12.2 billion light-years from Earth. It was captured by Fermi's Large Area Telescope (LAT) and the GLAST Burst Monitor (GBM) which between them recorded "the blast's initial, or prompt, gamma-ray emission from energies between 3,000 to more than 5 billion times that of visible light".

NASA's Swift satellite subsequently deployed its UltraViolet/Optical and X-ray telescopes to provide this image of the explosion's X-ray afterglow: 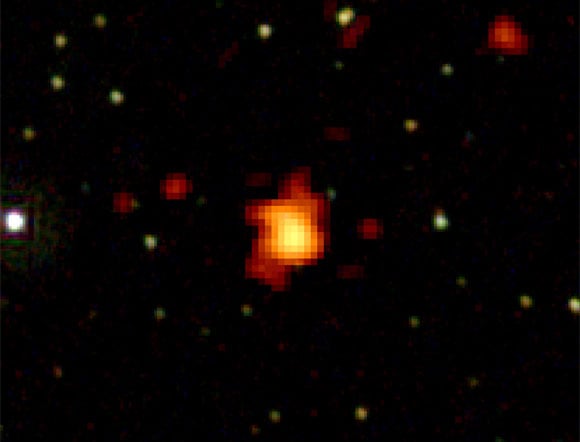 Peter Michelson, the principal investigator on Fermi's Large Area Telescope, enthused: "We were waiting for this one. Burst emissions at these energies are still poorly understood, and Fermi is giving us the tools to understand them."

To put the scale of the burst in prespective, NASA says it "exceeded the power of approximately 9,000 ordinary supernovae, if the energy was emitted equally in all directions". The agency explains that this is "a standard way for astronomers to compare events even though gamma-ray bursts emit most of their energy in tight jets".

Scientists used the event's distance and Fermi readings to calculate "the slowest speeds possible for material emitting the prompt gamma rays" - a figure of 99.9999 per cent of the speed of light. The burst's "tremendous power and speed make it the most extreme recorded to date", NASA notes.

Fermi's oberservation are helping scientists understand exactly what provokes these massive outpouring of energy. NASA explains that "most occur when exotic massive stars run out of nuclear fuel", provoking the core to collapse into a black hole.

As the star crumples inwards, jets of material are ejected into space at high speed - "powered by processes not yet fully understood". The afterglow effect is caused by the jets interacting with gas previously shed by the star, NASA notes.

There's more on the event, including info on further observations by the Gamma-Ray Burst Optical/Near-Infrared Detector on the 2.2-meter telescope at the European Southern Observatory in La Silla, Chile, right here. ®