Vid Conversion kits have been developed which can upgrade any normal car for autonomous driverless operation. Video is now available from such a car, driving without human input in the Nevada desert, showing fruitless attempts by US navy bombers to destroy the self-directed machine.

The vid comes courtesy of Kairos Autonomi, the Utah company which makes the "Pronto4" robo-car conversion kit. Rather than one of their automated drivers snapping the shackles of human control and having to be destroyed by the military, however, the bombing was actually a training exercise for US Navy jet pilots. It took place at the end of January at Naval Air Station Fallon in Nevada, and was announced by Kairos last week.

The bombs being dropped around the speeding car are inert training rounds rather than live 500 or thousand-pounders. But they are smart laser-guided ones, showing the difficulty that normal smartbombs have scoring direct hits on moving targets. The car was stopped on the eighth try, the nearby impact of the inert bomb stalling the engine.

According to Kairos, the car is a Nissan Altima and converting it to unmanned driverless operation took less than four hours using the Pronto4 kit, which the firm refers to as a "strap-on autonomy system". The company says that any vehicle you like can be fitted out with a strap-on robo driver and then perform such tasks as "perimeter patrol", convoy leading/following" or even "covert operations". The car, van, lorry or whatever is then "optionally manned". 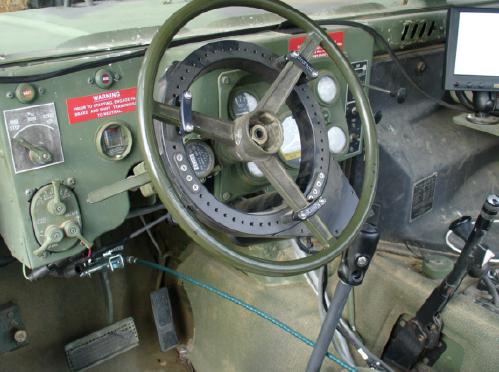 Kairos believe that the robo strap-on gear would be ideal for driving unmanned supply trucks through the minefields and roadside bombs of Iraq or Afghanistan, or other dangerous military applications. They say it can be remotely "tele-operated" using a video feed, or follow a pre-generated course on its own. Pronto4-pimped cars competed in the last DARPA robocar event, apparently.

The machine can cope with "city, highway and off-road" according to the product sheet (pdf), acting as an autopilot for a human driver if required: you just tap the brake to take manual control. Kairos, like many others, are literally having no truck with Vista - the controlling computer is a Core 2 Duo, 1 gig RAM Windows XP box.

The only thing the Pronto4 doesn't seem able to do is cope with traffic. Once it can do that, it would seem that the long-anticipated day when we can simply set our cars to take us wherever we want and then sit back for a snooze, a beer or a bit of TV is finally at hand. ®

US Department of Defense releases list of firms allegedly linked to the Chinese Army. Surprise surprise, Huawei makes an appearance