Faint 'fuzzball' visible over next couple of days

Comet Lulin will over the next couple of nights be visible to the naked eye as it approaches to within 38m miles of Earth, although sky gazers shouldn't expect to see more than a "fuzzball".

NASA's Swift Gamma-ray Explorer satellite has been keeping an eye on the object, discovered in 2007 by Ye Quanzhi and Lin Chi-Sheng from Taiwan's Lulin Observatory, as it creeps across the heavens. Here's the comet passing through the constellation Libra - a composite image of Swift data and a Digital Sky Survey image of the star field background: 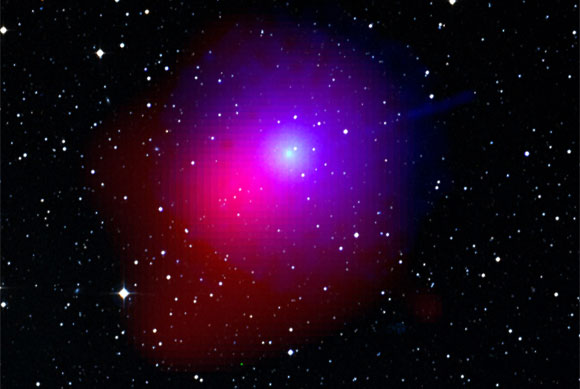 Lulin is unusual in that it orbits the Sun in a clockwise direction - as opposed to the anti-clockwise path followed by all the solar system's planets and most other bodies. As it prepares for its closest encounter with the Sun, it's sheddding "nearly 800 gallons of water each second" - or enough to "fill an Olympic-size swimming pool in less than 15 minutes", as NASA correctly quantifies it.

This revelation came from Swift's Ultraviolet/Optical Telescope (UVOT) which "can't see water directly" but is able to pick up hydroxyl (OH) molecules which, along with hydrogen atoms, are produced by the Sun's ultraviolet action on the water. In Lulin's case, the satellite detected a hydroxyl cloud "spanning nearly 250,000 miles, or slightly greater than the distance between Earth and the moon".

For those of you hoping to cop an eyeful of Lulin, the Telegraph explains that "for most locations in the Northern Hemisphere, Lulin will be easiest to spot after midnight, when it is high in the sky".

However, Joe Rao, of SPACE.com told the paper: "For those not-so-seasoned folks, I would advise them not to expect anything awe-inspiring. Visually to the naked eye in a dark sky, Lulin looks like a dim, fuzzy 'star' and in a small telescope it appears like a fuzzball... somewhat brighter and more concentrated near the centre and more diffuse around the edges. As comets go, it's nice, but casual skywatchers are more likely to say, 'That's it?' as opposed to more experienced observers who might actually utter, 'Oh, wow'."

There's more on the Swift observations of Lulin, including additional data from its X-Ray Telescope here. ®

NASA is Boeing to get to the bottom of that Starliner snafu... plus SpaceX preps to blow up a Falcon 9

Roundup Also: Fancy a trip round the Moon? Of course you do, but there's a catch...

Beats the guidance it didn’t think would survive the pandemic