I've done that for years by advocating legal, licensed P2P file sharing, which I find almost everyone except a few activists would to have at least like to have the choice to use. Most technology utopians hate it though because it's an admission of failure. Free music is about the only real 'success' the nets have delivered.

There's another view of Web 2.0 evangelists which I call 'Why not?' For example, 'Why not turn up at Grand Central Station wearing underpants in a big Flash Mob?'

But I don't think 'Why Not?' is good enough. Things need to have a purpose. If you have a project or a purpose, you can use the medium to achieve that. With no ideas, no project, you have nothing. The evangelists simply believe can use this metaphysical glow of this medium to woo people.

People forget the world's first Flash Mob in 2003, organised by Bill Wasik, was a joke. It was a joke on the gullibility of New York hipsters who would react to any kind of electronic information, and do anything you told them.

What's fascinating is that the 'Why Not?' ethos of Web 2.0 people started as a joke against them. 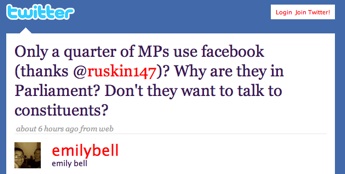 Web 2.0 people don't do jokes. Cannot compute. Now Linus Torvalds, the guy who started Linux, likes to say that technology doesn't change people, people change the technology. Again, isn't there a risk over-estimating some of the effects of technology?

McLuhan's argument was that media give rise to everything, that media is the root of modern life. Obviously that isn't true, and I'd never argue that. But it has an effect. Moving from oral storytelling to reading books by candle light did change things socially. It's important to recognise that.

The oral tradition changed but I can't buy that the human appetite for hearing a story diminished - we love stories more than ever probably, they just come in so many different forms.

People want zig-zaggy stories now. If we can discuss it without surrendering to it, we can find new ways of telling stories that baffle people, knock them off balance, and get them engaged. That's good. But Web 2.0 is antithetical to a real understanding of what media can do to culture, because all it says is let's surrender to the medium, and do whatever it wants to do.

When you look around you though, the best cultural operators are not surrendering their authorship or control, they're using it to entice audiences with new kinds of stories.

Next page: A Media Executive Can Lose Himself In London
Page: