Stargazers peer into the 'Eye of God'

The European Organisation for Astronomical Research in the Southern Hemisphere, aka (mercifully) ESO, has released an impressive image of the Helix Nebula captured by La Silla Observatory in Chile.

The nebula, lying at around 700 light-years away in the constellation of Aquarius, has quickly been dubbed the "Eye of God", for obvious reasons: 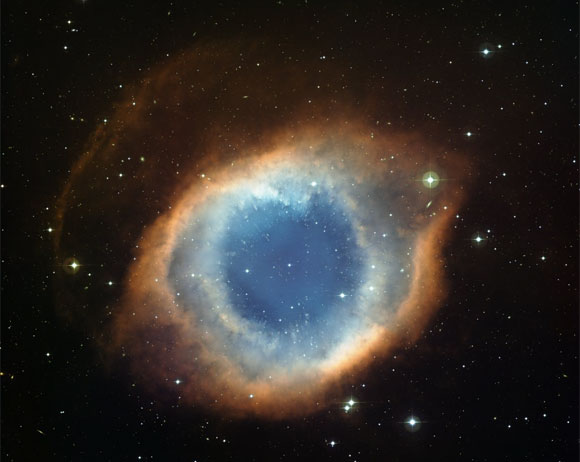 ESO explains that the Helix (NGC 7293) is the result of the "final blooming" of a Sun-like star before its "retirement" as a white dwarf.

Gas blown from the star's surface radiates outwards and "shines" under ultraviolet light from its hot progenitor. The photograph, taken by the Wide Field Imager attached to the 2.2-metre Max-Planck Society/ESO telescope, shows a central blue-green glow caused by "oxygen atoms shining under effects of the intense ultraviolet radiation of the 120,000°C central star and the hot gas".

ESO elaborates: "Further out from the star... the red colour from hydrogen and nitrogen is more prominent."

A notable feature of the Helix Nebula are the "small blobs, known as 'cometary knots'" boasting "faint tails extending away from the central star" which can be seen around the nebula's blue "iris" (easier to spot in the bigger image here).

ESO explains: "Although they look tiny, each knot is about as large as our Solar System. These knots have been extensively studied, both with the ESO Very Large Telescope and with the NASA/ESA Hubble Space Telescope, but remain only partially understood."

The Helix Nebula first popped up in "a list of new objects compiled by the German astronomer Karl Ludwig Harding in 1824". Its name derives from "the rough corkscrew shape seen in the earlier photographs". ®