World of Warcraft: 'The crack cocaine of the computer world'

Is World of Warcraft as addictive as crack cocaine?

Some say yes. Others are too busy playing World of Warcraft to answer.

The former opinion is given by a Swedish youth organization that works with addictions. The org says it's releasing a new report labeling the online swords n' sorcery excursion as "the most dangerous game on the market". 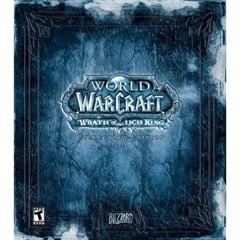 Northrend is covered in "snow".

The Youth Care Foundation (Stiftelsen Ungdomsvård) works to advocate more active alternatives to computer games for Swedish youths (such as assembling cheap, modular furniture). Author of the report Sven Rollenhagen claims: "There is not a single case of game addiction that we have worked with in which World of Warcraft has not played a part."

"It is the crack cocaine of the computer world. Some people are literally unable to drag themselves away and will play it till they drop," he told The Telegraph.

The report's poster boy is a 15-year-old Swedish boy who did exactly that. Earlier this month, the youth collapsed and went into convulsions — brought about by sleep deprivation and starvation after an extremely long gaming session.

(If only there had been some sort of authority to look over the boy. Perhaps someone with the wisdom of age from whose loins he could have sprung, then raised him for 15 years, bought the computer, and paid for his WoW account every month.)

The org's assessment has received backing from the Swedish National Institute of Public Health, which warns that computer addiction is become more widespread across the world.

And if WoW controlling your mind wasn't enough, there's also potential damage to the soul. American evangelicals have also fingered the game as the #20 most sinful game of the 2008 Holiday Season.

Unfortunately, the Youth Care Foundation's report hasn't been published yet for us to properly vet why WoW deserves the government-approved title of "crack cocaine of the computer world." As far as we know, there hasn't been any reported incidents of children doing a line of Arcane Powder off a hooker's ass. ®

Fortunately for Blizzard, it's easy to recover from this kind of bad PR. If WoW has taught me nothing else, it's that all the game maker needs to do is perform quest after quest for the Youth Organization until its reputation is raised to exalted.