The UK government has given the go-ahead for a team of British boffins to mount an expedition to a dark, cold lake buried in a cavern three kilometres beneath the ice sheet of Antarctica.

The Natural Environment Research Council (Nerc) is funding university researchers and the British Antarctic Survey to explore icy Lake Ellsworth, the size of Lake Windermere, hidden deep beneath the austral ice cap. The boffins will be allied with others from the National Oceanography Centre in Southampton, already well-known for their below-the-ice droid submarine probe powered by 5,000 D-cells. 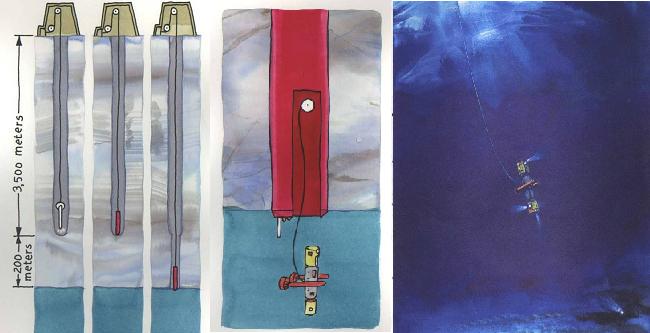 (Images to the left found on back of fag packet at the Antarctic Survey cafeteria.)

"This project is a great scientific challenge and the technology required to drill 3 km through the ice without contaminating the lake is equally ambitious," says David Blake, tech supremo at the Antarctic Survey. "Over the next few years we will build a hot water drill and probe, and make preparations to transport a sophisticated operation deep into the interior of West Antarctica. We really are at the frontiers of scientific exploration."

Having invented the new drilling tech and ice probe robots necessary for the expedition, the boffins plan to head for Antarctica in 2012 and return the following year. They will collect samples both of the lake water and sediment from its bed.

There's no suggestion of lost tunnel civilisations, hidden Nazi bases or whatnot. Nor will the boffins be making their examination first-hand by hot-drill mole cruiser podule - rather they'll remain on the surface and send the robots and samplers down to do the work.

Nonetheless, it's thought there could be all kinds of bizarre life down in the chilly depths of Lake Ellsworth - strange extreme organisms evolved over aeons along a separate track to that followed by the ordinary surface lifeforms of the sunlit world.

"Our team will be the first to explore this ancient lake," says Professor Martin Siegert of Edinburgh Uni. "It is a dark, cold place that has been sealed from the outside world and it's likely to contain unique forms of life. We hope to discover more about how life can exist in extreme environments and how Antarctica has changed in the past – which might help us understand more about other places on earth."

Long ago Antarctica was much warmer and hosted a wider array of prehistoric life, some of which may have managed to evolve and survive in the dank and frozen depths below the icy crust.

It's probably too much to hope for that the boffins will awaken some ancient horror, slumbering deep below the polar wastes. Disappointingly, much though it sounds like a suitable locale, Lake Ellsworth is probably not the lair of Grendel's mother.

But the boffins think it'll yield some interesting stuff, telling us more about life in extreme conditions - possibly relevant to other planets, even. It all sounds well worthwhile to us here on the Reg boffinry desk.

All in all, it's a surprisingly groovy place, the Antarctic - what with the gigantic clingfilm pumpkin strato-cruisers, the polar Inspector-Gadget stilt base, the inflatable moon habitat tents on trial - and the occasional drunken punch-up among the scientists to keep things interesting. The slumbering horrors, escaped Nazis, antediluvian lake-dwelling monster-mothers etc have probably all moved away to get a bit of peace. ®