The British National Party has pulled off a bit of a blinder by fronting an anti-immigration campaign with a poster featuring a Spitfire belonging to 303 Squadron of the RAF - the "most effective Polish squadron during the Second World War", as the Telegraph puts it. 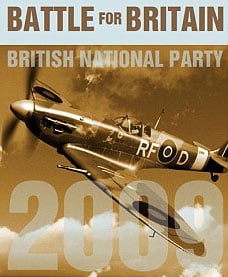 A spokesperson at the Royal Air Force museum explained: "The Spitfire in the poster can be identified as belonging to 303 Squadron of the Polish Air Force by the code letters 'RF' painted in front of the RAF roundel. 303 Squadron operated Spitfires from Northolt, Kirton-in-Lindsey, Coltishall and other RAF stations in the UK between 1941 and 1945 after flying Hurricanes in the Battle of Britain."

John Hemming, MP for Yardley, Birmingham, weighed into the BNP, mocking: "The BNP often get confused and this happens because they haven't done their research. This is just another example of them getting it wrong. They have a policy to send Polish people back to Poland - yet they are fronting their latest campaign using this plane.

"It is absurd to make claims about Englishness and Britishness fronted by this image. It's obvious they just picked an image at random and they are really clutching at straws if they say this was deliberate."

The BNP, however, really did insist it was aware of the plane's provenance, and spokesman Simon Derby defended it was "a symbol of the Battle of Britain and represented the economic struggle the country is facing at the moment".

The last major example of the Polish coming over here and taking our jobs was, as the Telegraph notes, during the aforementioned Battle of Britain when their pilots accounted for 203 Luftwaffe aircraft - roughly "12 per cent of total German losses".

303 Squadron's pilots were the only Polish military representatives invited to the 1946 London Victory Parade. Sadly, they were forced to decline "because no other Polish units were invited", the Telegraph concludes. ®

Coming in at number 5, it's a blast from the past! Tenable's 2020 security flaw chart show features hits of yesteryear

You know that update thing? JFDI

Analysis Internet engineers warn this is only the beginning

Did you know Arm has an Internet-of-Things cloud? Not anymore. Wants to offload it to Softbank