American astrogeologists believe that there may be pockets of liquid water trapped in sediment layers beneath the slopes of Olympus Mons - the titanic 15-mile-high Martian volcano, three times as high as Mount Everest. Such underground ponds or puddles might be home, they speculate, to strange alien lifeforms. 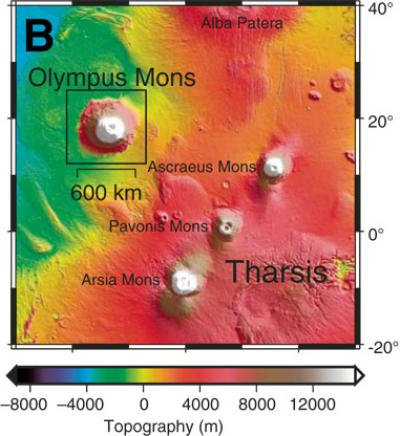 Patrick McGovern of the Lunar and Planetary Institute and Julia Morgan, earth-sciences prof at Rice Uni in Texas, arrived at their conclusions by using space-probe data to model the formation of Olympus Mons.

"What we were analyzing was the structure of Olympus Mons, why it's shaped the way it is," says McGovern. "What we found has implications for life – but implications are what go at the end of a paper."

According to the two profs' analysis, the asymmetric shape of the mighty Martian mountain can only be accounted for by the presence of watery clay strata under the volcanic materials making up the upper levels of its slopes. Evidence of clay has already been seen on Mars by the Mars Express orbital surveyor.

Mars is mostly dry, and such water as is known to exist - discovered beneath the surface by NASA's Phoenix lander amid the freezing, polar dune seas of the Vastitas Borealis - was in the form of ice. Liquid water, regarded as necessary for the formation of life along Earthly lines, may never have been present on Mars at all.

But Morgan and McGovern reckon that in fact reasonably warm - even hot - liquid water either does, or did, exist in the clayey strata which their models say must lie beneath the slopes of Olympus Mons. The mighty volcano appears dormant now from space, but at one time it must have been very hot - and warmth may still permeate its lower reaches.

"This deep reservoir, warmed by geothermal gradients and magmatic heat and protected from adverse surface conditions, would be a favored environment for the development and maintenance of thermophilic organisms," the two profs write.

If their theories are correct, suitable conditions for bizzaro sun-dodging lifeforms - somewhat like those present around certain of Earth's undersea geothermal vents - were surely present in the remote Martian past. Such conditions, and such ET lifeforms, may yet be clinging onto existence below the great mountain, protected from the arid chemical hell of the surface.

That said, spacecraft have detected no sign of geothermal activity around Olympus Mons. It may be that the monster volcano - the tallest mountain in the Solar System - is as dead as the rest of the red planet appears to be.

"Spacecraft up there have the capability to detect a thermal anomaly, like a magma flow or a volcano, and they haven't," admits McGovern. "What we need is 'ground truth' – something reporting from the surface saying, 'Hey, there's a Marsquake,' or 'Hey, there's unusual emissions of gas.' Ultimately, we'd like to see a series of seismic stations so we can see what's moving around the planet."

The two boffins' research is published in the journal Geology (subscription required). ®