The next version of Apple Mac OS X operating system, Snow Leopard, will be released on June 8 - if one Apple-watcher's prediction is correct.

The Baltimore Sun's David Zeiler, writing in his "Apple a Day" blog, came to this conclusion by recounting recent history and examining the events schedule of San Francisco's Moscone Center, the home of Apple's Worldwide Developers Conference (WWDC) since 2003, when it moved from its previous venue, Silicon Valley's San José Convention Center.

WWDC has traditionally vied with January's Macworld Expo as the stage for major Apple announcements. At his keynote for WWDC 2008, for example, Steve Jobs announced Snow Leopard, aka Mac OS X 10.6, which he said would be ready in "about a year."

Apple has not yet announced the dates of this year's WWDC, but last year, the five-day event was held June 9-13. In 2007, it was June 11-15, and in 2005, it was June 6-10. WWDC 2006 was an outlier, taking place August 7-11 - likely because Apple was waiting for Intel to provide the Woodcrest-class Xeon processors used in the Mac Pro that it announced at that year's keynote.

Zeiler then checked Moscone West's schedule - the annex where WWDC is held - and there he found a listing for a seven-day "Corporate Meeting" from June 6-12. Considering that June 6 is a Saturday, and giving Apple two days to set up - including hanging their usual giant banners - the time-honored Monday-morning keynote taking place on June 8 seems a realistic possibility. 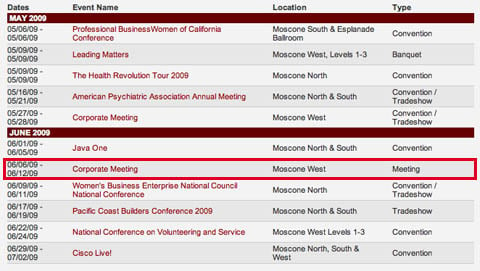 And here's where Zeiler's sleuthing gets clever. He then checked Amazon's book listings to find out when Snow Leopard books are scheduled for release. Bingo. The earliest ones are planned for mid-June - right after WWDC and right in time for a June 8 Snow Leopard release.

We believe Zeiler is onto something.

But we won't go as far as Philip Elmer-DeWitt of Fortune, who predicts that the man announcing the release of Snow Leopard on June 8 will be none other than His Steveness Himself.

It's not that we don't think Elmer-DeWitt presents a good argument. It's just that we're a bit weary of the ongoing Jobswatch.