Bletchley Park's National Museum of Computing (TNMOC) has hooked up with "chip artist" Pixelh8, aka Matthew Applegate (pictured below), for a most unusual project - a musical composition in which the "instruments" are the museum's collection of vintage hardware. 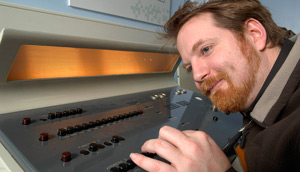 The work, entitled Obsolete?, features samples of over 20 venerable machines, including the Atari 800XL, Amstrad CPC464, BBC Micro, ICL Line Printer and, of course, the Colossus MK2 Rebuild. In case you're wondering just how you wrest music from such kit, there's a preview here. The beginning of the piece features a major input from Colossus, according to TNMOC.

In creating Obsolete?, classically-trained Matthew first turned his ear to TNMOC's wide selection of available equipment, before making his final instrumental choice. He said: “In composing the piece, I looked into the history of the machines and the amazing history of The National Museum of Computing building – a wartime codebreaking centre where people worked in secret applying their amazing intellects to defeat Hitler. So the composition has a tremendous emotional depth as well as reflecting cryptography, mathematics and our technological heritage right up to the present day.”

Of all his orchestra, it was Colossus which appears to have most inspired the musician. He explained: “One morning, as I passed Colossus, a huge machine that could only fit in the largest of trucks, it was making a different sound. It usually has a set rhythm and a set sound, but that day it was running a different algorithm and some of the panels for the relays had been removed, and the sound was very different. I quickly set up my recording equipment and was delighted with the new sounds that I captured.”

Obsolete?, which is funded by the PRS Foundation, will premiere at Bletchley Park on 20 and 21 March. Tickets for the performances are available here. There's more on the creation process at Pixelh8's website here. ®