NASA's next shot at launching space shuttle Discovery will be on Sunday, following repairs to the spacecraft's troublesome plumbing that grounded this week's attempt.

Workers at the Kennedy Space Center in Florida are fixing a leaky Ground Umbilical Carrier Plate (GUCP) interface, which connects a hydrogen gas vent line to Discovery's external fuel tank. The 7-inch quick disconnect [pictured below] will be replaced, retested and checked for leaks before a 7:43pm launch attempt on Sunday. 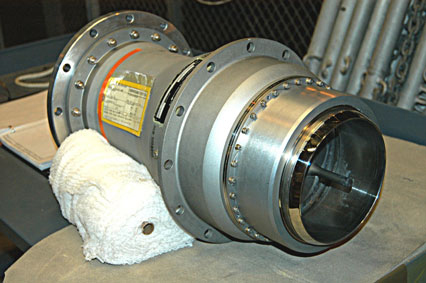 Liftoff has already been delayed four times due to concerns over the shuttle's hydrogen flow control valves — which had been damaged on Endeavour's STS-126 mission last November. NASA said Wednesday's troubles occurred outside the shuttle and are unrelated.

NASA said the weather forecast calls for an 80 per cent chance of acceptable conditions at launch time. The space agency expects ideal launch conditions to deteriorate for potential Monday and Tuesday attempts.

When the Discovery does launch, members of mission STS-119 will deliver a final set of solar arrays to the International Space Station to pump extra juice into the orbiting outpost for when it expands its permanent crew from three to six.

The shuttle will also take home Expedition 18 Flight Engineer Sandra Magnus, who's been staffing the ISS since November 2008. ®