The challenge as a technologist, though, has been in anticipating the finer details of how the cloud and its related technologies - the data center, replication, and synchronization - will be adopted by people and organizations.

Sure, Microsoft was heading in that direction in the labs, but Amazon, eBay, and Google got there first in their businesses, and Microsoft is now fast trying to catch up.

Speaking to The Reg at Microsoft's Mountain View, California campus recently, Rashid outlined the challenge: "What I've never been very good at - and don't think anybody's that great at - is knowing what society is going to do with them [technology innovations]. That's the harder part."

As a professor at the Carnegie Mellon University, Rashid helped in the creation of the Mach kernel. That early work speaks to the challenge. Mach was intended as replacement for BSD and Unix but has snuck into Apple's orgasmically successful iPhone. 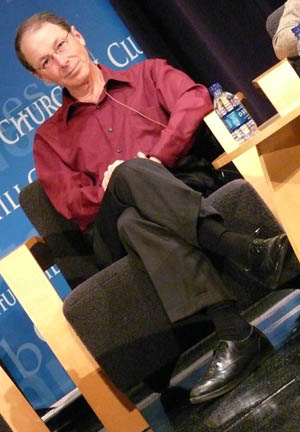 Rashid: technology prediction will get you so far

"Did I realize in the early 1980s that the operating system I was building would someday run on a cell phone. I'd have said: 'What's a cell phone?' - they didn't exist. So you never really know what's going to happen or how something that you've created is going to be eventually used and what forms it's going to take. Technologists are never good at that kind of prediction."

After joining Microsoft in 1991, Rashid patented work in data compression, networking, and operating systems that helped turn Windows into the multi-billion dollar gift that keeps giving to the Microsoft bottom line.

That track record's important given that the 850-person R&D operation Rashid now runs is working on search, social computing, and systems architecture and is getting a share of the company's overall $9bn research-and-development budget thanks to chief executive Steve Ballmer's enthusiasm for beating Google online and easing Microsoft's reliance on the PC.

The work of Rashid and others on his team might yet turn Microsoft's nascent cloud into a multi-billion-dollar business akin to Windows - despite its lateness and early mistakes.

Microsoft was forced to announce a major U-turn on cloud-based storage this week after it succumbed to its usual product-segmentation fever, but the company's already got the fundamentals in place with data centers and a core-computing fabric that it can build on. And that's a lot more than some others have, who are still at the talking stage.

Rashid is certainly optimistic. "There's been a huge impact on the business of the company, and the products we ship," he said of the R&D operation. "We've been creating $1bn businesses every few years over the last 10 years."

Asked if he foresaw the rise of the cloud as a successor to these $1bn businesses on the desktop and server, Rashid indicated he thought Microsoft was moving in the right direction.

"There are two ways to answer that. The first is to say 'yes' - I've got slides," he confessed. "One of the things you see in any research environment is you get to see the technologies people are developing, you can make summaries about what people doing with them, you can put them in slides.

"Did we know we could build these big data centers...were we thinking about the services mesh? Yes, absolutely," he said.

"Did we know it was going to pan out in a particular way. Did we know what's happening now with the shift to cloud services and the way businesses are thinking about large-scale computation? No. The exact details of how things pan out have to do with society, legal and government environment, and business climate. But were all the seeds there? Absolutely."