Lights out, Britons told - we're running out of power

Do your bit because Labour didn't

Public sacrifices to save political face?

"If people are being asked to use electricity as efficiently as possible, they should do that because it's a cost-efficient thing to do, rather than because the government created a crisis through bad planning," says Lilley.

Complicating things is an additional dilemma, of the government's own making.

The Whitehall department responsible for keeping Britain's lights on now has additional duties of "tackling climate change" and "moving towards a low-carbon economy" - it's the new "Department of Energy and Climate Change" (DECC). This means it is obliged to oppose exactly the kind of fossil-fuel power generation capacity that will save Britain from blackouts. So which will it choose?

On the department's own website, under the heading "What We Do" - Climate Change is a higher priority than maintaining the UK energy supply: 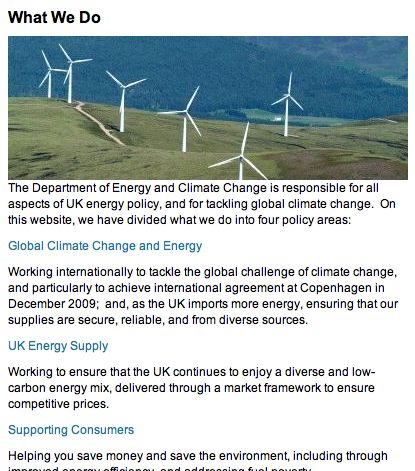 The Energy Savings Trust has a budget of £43m a year. Around 150 staff are on secondment from BERR, the former Department of Trade and Industry. Much of its work is duplicated by two other quangos - the £250m a year Carbon Trust, and Envirowise.

The remit is explicitly to change people's consumption patterns. The umbrella project "Act on CO2", intended to co-ordinate the output of different government departments, was described as "the premier government-backed behaviour change brand" according to tender documents seen by The Register.

"The Energy Saving Trust is about making you feel guilty about 'your impact on climate change'. It is about how you can generate your own energy – no doubt as efficiently as a normal power station," says Woudhuysen.

"With rights, Tony Blair enlightened us, come responsibilities. This clearly means that New Labour has the right to screw up on energy supply - while hectoring us about how we should take responsibility for its failures."

The Trust was named as the 9th most useless quango in 2005 - along with the Potato Council. ®

For a quango that puts communications as priority, the Trust doesn't half drag its feet on responding to enquiries - reader Graham Crocker spent a fruitless three months trying to get answers. Eventually, the Trust admitted, the low energy bulbs make little difference to the householder because the lower heat output in cool climates - like ours - means people spend more on heating. "The Trust do not seem to have fully formed policies or a coherent strategy to deliver them," Graham concludes.

'Within the next decade we'll either have it or we won't,' prof tells The Reg

UK's climate change dept abolished, but 'smart meters and all our policies strong as ever'

What? Hang on, isn't it an EU mandated project?