The image of a phone said to be Samsung’s first foray into the Android OS market has appeared online. 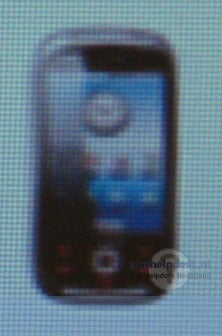 Is this Samsung's first Android phone?

First published by website GSMhelpdesk.nl, the blurry image is thought to have been captured at an event held recently in Amsterdam where, the report hints, Samsung gave attendees a run through the unnamed phone’s features.

The Android phone’s tools are accessed through a large capacitive touchscreen, while the device’s format is described as candybar – suggesting the phone doesn’t have a slide out physical keypad as the Android-based T-Mobile G1 does.

A camera will, of course, be included, but the report said Samsung’s still undecided about quality and so it could sit anywhere between 3.2 and 5Mp. The phone’s said to have a decent amount of on-board memory, with reference also made to Micro SD expandable storage.

Connectivity specifications for the Samsung Android include quad-band GSM, HSDPA 3G of up to 7.2Mb/s and 1.4Mb/s HSUPA.

Other named features include Bluetooth 2.0 and support for Google Maps’ StreetView and Latitude services. It’s unclear if a digital compass, as included on Nokia’s N97, will feature on the phone.

Alas, details about a potential price or launch date haven’t cropped up yet. ®