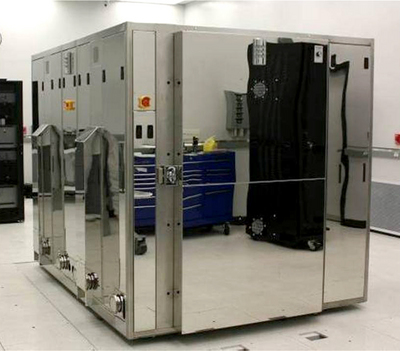 Not exactly portable yet.

According to Northrop, their record-breaking electric energy weapon actually put out slightly better than 105kW in this latest test. The firm claims that the blast was maintained for better than five minutes without problems, that it took "less than one second" to power up and that the beam quality was "very good".

The 100kW threshold, while somewhat arbitrary, is generally accepted as the point at which a laser beam becomes truly weapons grade - able to achieve useful battlefield tasks. Such tasks might include the expeditious blasting of enemy rockets, shells, missiles or mortar bombs in mid flight - so preventing the harassing attacks on military bases which are such a common problem for western troops in combat right now.

"This achievement is particularly important because the 100kW threshold has been viewed traditionally as a proof of principle for 'weapons grade' power levels for high-energy lasers", says Northrop raygun veep Dan Wildt.

Previously the only tech which could deliver powerful beams was that of chemical lasers - for instance the massive chemical oxygen iodine laser (COIL) cannon fitted in the mighty Airborne Laser jumbo jet, intended to blast possible future North Korean ICBMs as they boost upward from their launch pads.

But COIL weapons require immense amounts of dangerous, corrosive, toxic fuel and their exhaust products are equally nasty. They can only be justified in rare circumstances like standing off nuclear attack - or perhaps some kind of one-off, unattributable spec-ops mission by the COIL laser gunship.

Hence the push for electrically driven lasers. These are bulky, difficult to cool and require very large amounts of 'leccy (Northrop's kit is said to be about 20 per cent efficient, meaning that a 100kW war-beam requires half a megawatt of juice - in the heavy tank ballpark rather than handheld or humvee mounted). Nonetheless, they're a lot simpler to take to war than the chemical jobs.

Northrop's line is that achieving a hot electric beam is simple using their 15kW "laser chain" units, which the company says can be hooked up together to make a raygun of any desired power output.

"Getting to 100kW with replicated building blocks proves we can scale to these higher power levels if required," said Jay Marmo, Northrop programme chief. "Northrop Grumman is ready to bring high-power, solid state lasers to the defense of our deployed forces."

It can't have been as easy as all that, though. Northrop said ages ago they would produce a 100kW beam by the end of last year: but they only felt confident enough to have government reps in for a test as of last month. Meanwhile, despite the firm's claim that it has done much work on "ruggedising" the kit for field use, it still looks rather fragile and cumbersome.

Much more significantly to the average home raygun user, the unit is very large and heavy - in line with previous Northrop figures indicating about 1.5 tonnes of machinery for a battle-grade beam - and that's without power supply or beam pointing.

Such equipment will never do for head-mounted shark use. It seems that the supervillain seeking up-to-the-minute cranial energy weapons for his execution pool menagerie may need to dabble in a bit of Jurassic Park style retro-creature production as well. ®