Consumer pundits have long speculated that we would one day - perhaps even by now - have intelligent fridges which could be remotely controlled and monitored from afar using advanced communications links. But they couldn't realise that these fridges would become crammed with possibly-deadly organisms warped by extraterrestrial radiation into a hideous parody of life as we know it. 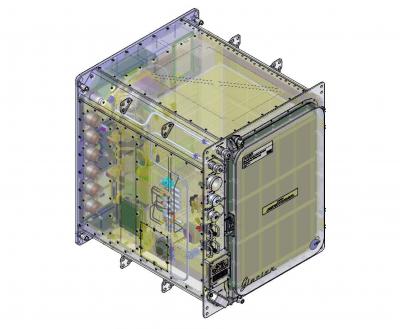 GLACIER. Should be called PANDORA*.

Most of us still don't have such hooked up appliances in our homes: but there is one well-known exception. The International Space Station (ISS) has a freezer aboard which is controlled via satellite hookup from a ground station in Alabama. This freezer, known as the General Laboratory Active Cryogenic ISS Experiment Refrigerator (GLACIER - see what they did there?*), was shipped up to the station by space shuttle in 2008.

This freezer, however, is not for storing astronaut pizzas or suchlike humdrum space nutrition. Rather it is used to preserve biological experiments - cell cultures, blood samples and so forth - for subsequent analysis on Earth.

The current ISS GLACIER is now apparently full, which means it needs to be brought down and emptied, while a new experiment-cooler is installed aboard the station. The space shuttle Discovery, now successfully docked at the ISS, has the replacement aboard and will carry the full coldness-casket back to Earth.

According to GLACIER's designers at Alabama Uni, the big chill-down of the space freezer for loading into Discovery was a major event in its hometown of Birmingham (the Alabama one):

This month's flight of space shuttle Discovery marks another milestone for GLACIER as the first freezer is re-packed on the shuttle for return to Earth. It is filled with frozen blood samples, cell cultures and other experiments.

From a satellite-linked control center in Birmingham, engineers at UAB's Center for Biophysical Sciences and Engineering recently sent the first 'start-up' signals to the ISS to begin cooling down GLACIER. It took more than six hours to reach the target temperature of minus 95 degrees Celsius, said UAB project coordinator Josh Dunn.

It seems to go almost without saying that the former terrestrial life with which the space freeze container is now packed has, of course, been subject to strange unearthly space influences - cosmic rays, microgravity, other bizarre emissions and conditions. I think we all know what that means.

There are basically only two ways this thing can go from here. Following a mishap of some kind, someone or something - a boffin, bystander, meddling kid, experimental animal - seems sure to get involved with the warped space biomaterial in some fashion. The freezer might break open during a careless unloading, there might be a shuttle prang, an agent of a foreign power working undercover at NASA might trouser some materials while nobody's looking - whatever.

Then, if we're lucky, we'll see the development of powers which will be used only for good, or at worst for a bit of supervillainy or world domination based out of a hollowed-out volcano lair.

If we're unlucky as to just who or what accidentally ingests, injects or otherwise absorbs the space stuff, we're looking at anything from the Attack of the Six Hundred Foot Invulnerable PMT Lady on up through killer insect swarms, invasions of peckish maneating carnivorous fruit etc.

And yet there are still people who think that the space station is irrelevant to their daily lives. ®

*We would suggest Preservation of Arcane, Newly Dangerous Organisms for Retrieval and Analysis - PANDORA. For obvious reasons.