Book Review Perplexingly, not one of the ecstatic dustjacket blurbs reads 'I could barely start writing for laughing.' It is, on the contrary, an "exceptional book", a "divining rod" and "the work of a genuine visionary". Goddam - and there was me thinking it was a wholly absurd conceit built atop a fundamental - and willful - misconception of the nature of Google.

But it is, anyway. Jeff Jarvis' What Would Google Do? categorises Google as an entirely new kind of company operating to entirely new, revolutionary rules that can be used to reshape the world because, as the publisher's blurb says, "everyone and everything - from corporations to governments, nations to individuals - must evolve in the Google era". Having deemed this wild generalisation to be self-evident truth, Jarvis then sets out to apply Google rules for life and business to anyone and everything. 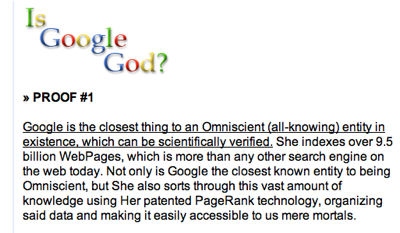 The Church of Google would approve

Or to be more precise, to publishing mainly, and then extremely superficially to a fairly random collection of industries and things that Jarvis has personal gripes with. He doesn't actually get on to these until halfway through the book, and the individual sections serve largely to indicate that Jeff Jarvis doesn't know a whole lot about a whole lot of things, but there are several corkers in there.

"Jeff Cola", for example. "What if Coke retooled a bottler to make special-order batches... if I committed to buying so many cases a year?" (Jarvis is as oblivious to FDA regulations as he is to auto industry safety approvals in the "Googlemobile" section.) "If I sold Jeff Cola to others on my blog... perhaps my price could drop because I'd be bringing in more sales and volume. I'd create a cola club. It's no different from Gary Vaynerchuk's Vayniaks making and promoting their own wine."

Actually Jeff, it's entirely different. Vayniak, one of the smarter ideas covered in What Would Google Do?, is an internet wine club/store that combines branding, destination and community. And on the first two points it arguably undermines some of what Jeff's pitching elsewhere. Vaynerchuk extends the social aspects of the wine trade to the internet, and while he does offer a 'design your own wine' system, I'll betcha that's shop window, not the bit he makes the money from. This is not the wisdom of crowds in action, this is one shrewd cookie playing the star/brand system with the aid of the new megaphone.

Next page: Show us the money
Page: