The California School of Economics

If you had to sum up the sales pitch that Cisco Systems is polishing up as it prepares to deliver its "California" Unified Computer System, it would look something like this: California will save you money, even if we charge a premium for server capacity.

Cisco, of course, has not admitted that it will in fact charge a premium for its B Series server blades, but it is hard to imagine that they will not be expensive considering the amount of stuff Cisco has packed onto them and the fact that Cisco will be a low-volume provider of blade servers (at least for a couple of years).

Like some other venerable systems - I am thinking here of IBM's AS/400 minicomputer, the touchstone of integration - Cisco appears to be pitching the total cost of ownership (TCO) benefits of an integrated system as a means to get people to pay a premium. But because this is 2009 and not 1988, there is also a consolidation factor at play that actually will save customers money, according to Cisco's own analysis.

The consolidation of networks is, as you would expect, a big piece of the California system story. Here's the basic idea, graphically, from Cisco: 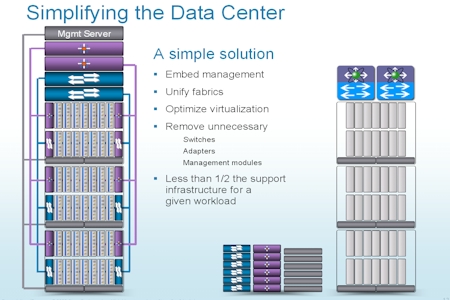 You basically put the server and network management out right where you'd expect Cisco to put it, in the top-of-the-rack in the UCS 6100 fabric interconnect switch. This is a variant of Cisco's Nexus 5000 switch, which combines Ethernet network traffic with Fibre Channel over Ethernet (FCoE) to link out to storage. Add in some optimized virtualization (and the Nexus 1000V virtual switch, which is called VN-Link sometimes), and then you rip out a whole bunch of cables, switches, adapters, and server management co-processors. Cisco says this means there is half as much support infrastructure to support blade servers the way that current generations of blades require.

The money adds up pretty fast according to Cisco. In a presentation that the company is sharing with prospects, Cisco put together some numbers on a 320-blade setup, which is the maximum size that a single California system spans with a 40-port fabric interconnect (that's 40 chassis with a maximum of eight half-width blades). Take a gander: 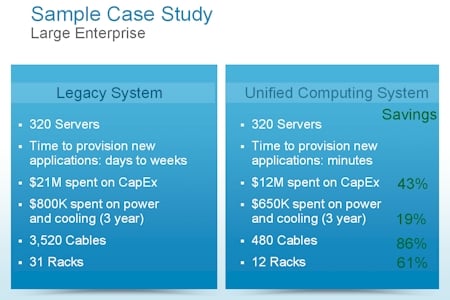 Using a "legacy" blade server, the setup cost $21m, including servers, chassis, switches, and so forth, (No storage, apparently, except possibly local storage on the blades). That blade server setup required 31 racks and 3,520 cables to get the blades connected to switches and storage, and it burned $800,000 on power and cooling over the course of three years.

Cisco says it can deliver a similar 320-server California system for $12m - a 43 per cent reduction on capital expenditures - and cut the power and cooling bill over three years by 19 per cent to $650,000. The California system takes up only 12 racks of space and uses only 480 cables. That is a huge reduction in cabling, more than the reduction that commercial blade server makers say they can bring compared to rack servers and their external switches.