If you believe the Gospel According to Robert J. Cringley, Google pilfered its top-secret modular data center from the Internet Archive.

In a now-famous 2005 online expose, Cringley puts Google co-founder Larry Page at a pitch meeting where the Internet Archive's Bruce Baumgart considers the advantages of stuffing a full-fledged data center into a shipping container. The Archive's "Petabyte Box" presentation is dated November 8, 2003, and on December 30, Google filed for a patent describing its own containerized data center.

Less than four years later, the patent was granted. And according to one former employee, it's now the norm for Google to erect its ultra-hot data centers by piecing together intermodal shipping containers pre-packed with servers and cooling equipment. Inside the Mountain View Chocolate Factory, Page and company call it Project Will Power.

The Internet Archive eventually built the Petabyte Box - though it shrunk the name a bit and stopped short of actually packing its compact contraption into a shipping container. A PetaBox planted at the San Francisco Presido has long hosted the Archive's Wayback Machine - an 150 billion-page web history dating back to 1996. 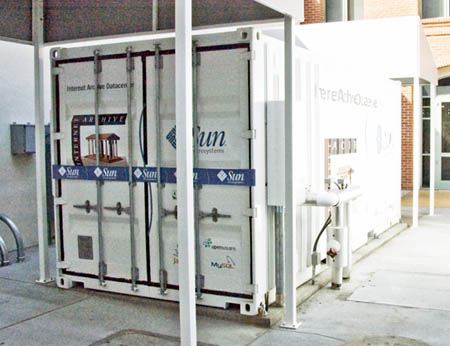 Internet history in a box

Now, more than five years after first pitching the idea, the outfit that launched the container revolution has finally containerized itself. This morning, deep inside the sun-splashed Santa Clara campus of Sun Microsystems, Internet Archive founder Brewster Kahle cut the ribbon on a single Sun Modular Datacenter housing the entire Wayback Machine. That's thirteen years of archived web pages packed into a container significantly smaller than your living room. 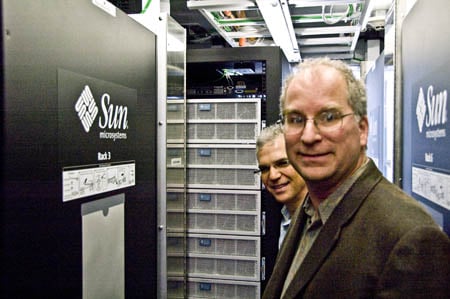 "You can actually take a tour of this data center and ask 'How big is the web?' You can ask 'How much does it weigh?' These are things you can actually wrap your hands around in a very literal way."

Next page: In the beginning...
Page: