Discovering the planetoid home of the Ureilites 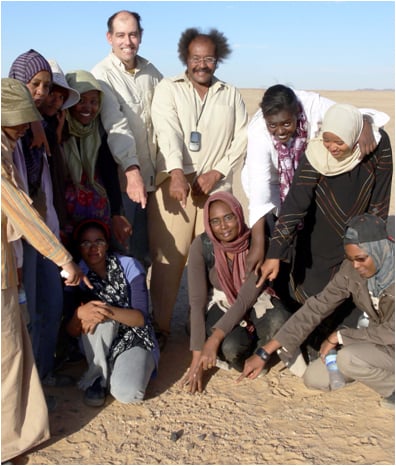 They said we were crazy.

Combining information from the Herschel spectrograms with the recovered pieces from the desert revealed that 2008 TC3 was a very rare type of asteroid known as a ureilite "F-type". It's theorised that all ureilites come originally from the same parent body somewhere out in space, broken off it during asteroid collisions in the past.

On the matter of the mysterious extraterrestrial ureilite source, Rumble says "Where that is, we don't know." However, data gleaned during the 2008 TC3 impact might help here: boffins have already done some backtracking. Based on spectrogram readings like that gleaned from the Canaries, they think that the body 1998 KU2 - a Heathrow-airport-sized lump which orbits mostly between Earth and the asteroid belt - might be the ureilite mother-lode.

Apparently ureilite is strange stuff indeed, based on examination of the Nubian impact fragments. It contains "nanodiamonds", a rare form of carbon. Other scientific treats include "very cooked, graphite-like carbon ... of all the meteorites that we've ever studied, the carbon in this one has been cooked to the greatest extent," says Carnegie's Andrew Steele.

Boffins aren't sure if the superheating occurred during far-off space collisions or because of "some other process".

Professor Richard Crowther of the UK gov Science and Technology Facilities Council, who chairs the UN working group on the planetbusting asteroid threat, reckons that the research could be handy in safeguarding Earth and the human race from a space rockopocalypse in future.

"The search for and study of asteroids is extremely important as not all impacts are as harmless as this small one in October," says the prof.

"Larger impacts of the size associated with the Tunguska event of 1908 occur every few hundred years and even larger impacts with asteroids and comets the size of mountains occur every few tens of millions of years. Any extra knowledge we can gain about asteroids will help us mitigate the potential effects of such impacts in the future."

There are more pics and graphics courtesy of NASA here, and there's a letter by many allied boffins in heavyweight boffinry mag Nature here (for subscribers). ®