Google has invested in a Silicon Valley startup that plants ads inside online photos. And The Reg can't help but wonder when the company will begin slipping virtual marketing into the very real cityscapes of Google Street View.

On Wednesday, a company calling itself Pixazza unveiled a new online-ad extravaganza that serves up mini-marketing messages when web surfers mouse over net photos. "Pixazza hopes to do for images what Google’s AdSense did for web pages,” reads a canned statement from CEO Bob Lisbonne. 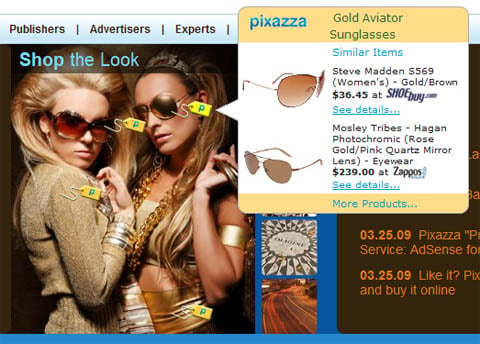 Run by a team of former Netscape employees - Lisbonne was a senior VP and the general manager of Netscape’s browser division - Pixazza has banked $5.75m in funding from two VC firms and, yes, the world's largest online ad broker. Headquartered in Mountain View, just down the road from the Google Chocolate Factory, the startup says that "Google’s investment underscores the innovative and promising nature of Pixazza’s new advertising technology."

As the Lisbonne indicates with his AdSense analogy, Pixazza operates across a network of third-party websites. But unlike AdSense, it doesn't use top-secret content-analyzing algorithms in targeting its ads. It uses "a distributed workforce of product experts" - otherwise known as people.

"Pixazza’s unique technical advantage is its crowdsourcing platform," said CTO and founder James Everingham, another Netscape alum. "No computer algorithm can identify a black pair of Jimmy Choo boots from the 2009 fall collection as well as a person. Rather than rely on computer algorithms, our platform enlists product experts to drive the process."

Speaking with Business Week, Everingham boasts that Google is particularly impressed with the startup's "crowdsourcing expertise," and considering Google's investment in the company, it's hard to question his claim. The Mountain View Chocolate Factory has significantly curtailed its spending of late.

However long it takes, we have no doubt that Google will one day tuck pay-per-click ads into Street View, further blurring the line between the real and the virtual. The company is already serving text ads when you search for public pics on its Picasa photo-sharing site, and it's working to crowbar any number of ad formats into the video-sharing extravaganza that is YouTube. It's only a matter a time before the ads are inside the images themselves.

Tagging in-photo product photos is just avenue. Might we see photos of real billboard space overlaid with virtual billboards? Sci-fi flicks from Minority Report to Brazil have long imagined future worlds plastered with digital advertising. In our world, this sort of ad-saturated dystopia gets closer with each passing day. And if you build a digital snapshot of our world, it's closer still. ®