Review A credit crunch camera or a model aimed at the digital beginner? You can take your pick when it comes to the Pentax Optio E70L. This budget camera costs less than £100, which is nice, but there’s a big difference between offering a low price and good value for money. Buying cheap can be an expensive mistake, so where does the Optio E70L sit? 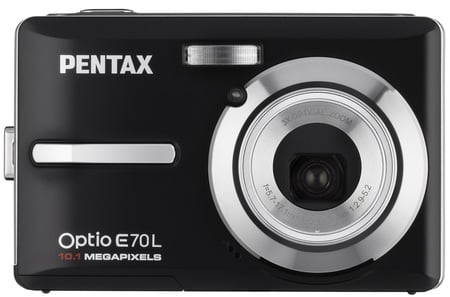 As expected for a camera at this price point, the Optio E70L is made of plastic. But despite its polycarbonate construction, it feels pretty solid in the hands. At the front is the usual zoom and flash arrangement, along with a protruding silver horizontal strip which acts as a finger rest.

On top are the power button and shutter, while at the back are a 2.4in LCD screen composed of 112,000 dots; zoom rocker; playback button; four-way controller for flash mode, macro, drive mode and smile/face detection selection; plus Menu and scene mode buttons.

On the right is an exposed mini USB port for PC/AV output. At the bottom, you'll find a flap covering the battery and SD/SDHC/MMC card slot. There’s also a plastic quarter-inch tripod bush.

Like many entry-level models, the Optio E70L uses a couple of AA batteries, which can be alkaline, Lithium or NiMH. Pentax reckons you can shoot around 180 frames with two fully charged batteries.