Review After a little over a year as the standard bearer for Samsung's PMP range, it's time for the YP-P2, aka the Yepp P2, to retire. But is its replacement - the YP-P3 – an evolution or a revolution? And has it got what it takes to lure buyers away from the default purchases in the segment: the ubiquitous multifunction iPod Touch and the slightly esoteric but highly capable Cowon iAudio S9? 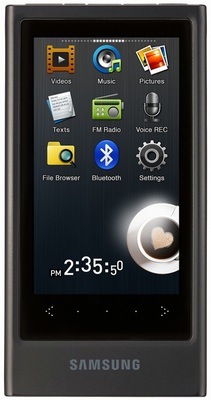 One obvious improvement is build quality. The P2 was a rather plastic affair but the P3 feels altogether more solid, thanks mainly to its brushed metal casing and glass screen.

External controls on the P3 have been shorn to a bare minimum, with only a power/lock switch and volume control on the top of the device and a proprietary Samsung USB port and 3.5mm headphones jack at the bottom.

That curious looking area you can see directly below the screen consisting of three dots and two arrows is actually just a swipe bar to bring up the music "mini player", which allows you to stop/play or skip a track while the P3 is doing something else. 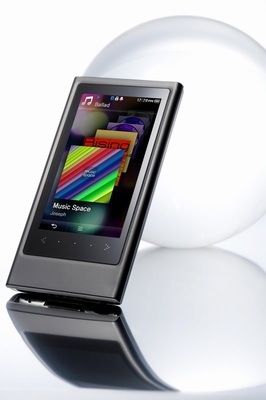 The dots and arrow icons

The P2's touchscreen UI was one of its weaker points. Not only did it not look particularly attractive but it was also a little clumsy and prone to either misinterpreting or ignoring commands. For the P3, Samsung has started with a clean sheet of paper - at least from a visual perspective - basing the UI on an icon and widget layout that will be immediately familiar to anyone who has used a Samsung Tocco, Pixon or Omnia phone. You even get the fully fledged haptic feedback system that Samsung fit to those same phones.