April Fool The US Patent and Trademark office published an Apple patent filing on Wednesday that analysts are calling a bold attempt by the Cupertino Fruit Company to protect its core corporate values and business practices.

Since the return of Steve Jobs to the consumer electronics giant and sometimes computer maker in 1997, Apple has become famous for its secrecy - so much so that many a journalist has programmed Microsoft Word's AutoText capability to replace brief key codes with the phrases "We don't comment on unannounced products" and "Apple declined to comment on this report".

Wednesday's patent filing endeavors to put a legal framework around Apple's paranoia secrecy by patenting procedures the company employs to maintain its renowned cone of silence.

One entire subsection of the filing is devoted to requests for information from its press contacts. For example, a voicemail system is described in which an outgoing message is provided and followed by the traditional beep, but any message left by the caller goes unrecorded.

A lower-tech system in which a series of steps to be taken when a ringing phone is detected by an Apple contact is also described. The steps include (and, as the filing states, "are not limited to") facing away from a ringing phone, rubbing one's hands briskly over one's ears, and loudly repeating "La-la-la-la-la!" until the "auditory signal" - patent-speak for "ringing phone" - is no longer detected. 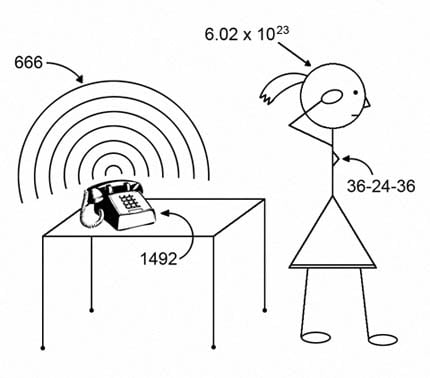 The filing also details an automated system for intercepting and deleting email messages received from a broad range of domains, including *@macworld.com, *@appleinsider.com, *@macsurfer.com, *@macdailynews.com, *@theregister.com (and *@theregister.com), and hundreds of others.

Another subsection of the filing lists an "electronic device for the inculcation of data-denial modalities among front-line liveware". This iPod-like device can be securely locked into a trainee's ear canal, where it will repeat an infinite loop of denial vocabulary until switched off by a prequalified Apple HR officer.

According to the filing, the terminology implanted into a newbie's cortex "includes but is not limited to no, absolutely not, most certainly not, of course not, under no circumstances, by no means, not at all, negative, never, not really, nope, uh-uh, nah, not on your life, no way, no way José, ixnay, and I'll have to get back to you about that."

Perhaps unsurprising to long-time Apple watchers, a final subsection describes a "simulation-shaping and snookering solution system" into which is fed digitized renderings in Autodesk's Maya binary-file format (.mb) of upcoming Apple products, and which morphs those designs into similar-but-altered 3D-image files that the system then automatically posts on MacRumors.com's forums, thus engendering the buzz that always precedes an Apple product launch.

As described in the filing, this system can modify lighting in certain sections of the image so as to make them appear Photoshopped. It can also be set to reproduce a series of images with increasing accuracy - or, should the operator so desire, inaccuracy - as the known-only-to-Apple product-release date approaches.