Apparently 400,000 new "environmental sector" jobs will be created by 2017, according to Gordon Brown, who reckoned 1.3 million people would by then be working in "green" jobs. According to Mandelson, "The huge industrial revolution that is unfolding in converting our economy to low carbon is going to present huge business and employment opportunities."

But what are these jobs - and how did they get that number?

In order to make the argument for the 'Green New Deal', the Department for Business, Enterprise and Regulatory Reform (BERR) commissioned Innovas, a market analysis consultancy, to research the size of the green economy.

Innovas identified three fundamental areas of economic activity in the ‘Low Carbon and Environmental Goods and Services’ (LCEGS) sector – ‘Environmental’, ‘Renewable’, and ‘Emerging Low Carbon’. These break down into 4 further levels, only one of which is detailed in the documents published by BERR. 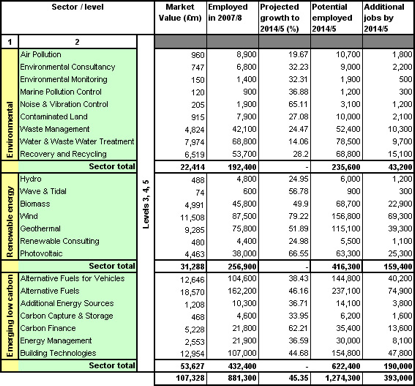 Each sector was surveyed to establish how many it employed, and its value and growth over 2007-2008. This growth was applied to the employment baseline to project the number of jobs in the LCEGS sector by 2015. So far, so rosy. But what lies beneath these figures, and what assumptions are behind these growth projections?

Take the LCEGS ‘Waste Management’ and ‘Recovery and Recycling’ sectors, which together promise nearly 25,000 new jobs. In 1996, the Landfill Tax was introduced, creating substantial revenues for the Government, and ‘incentives’ for alternative disposal, including recycling. According to the Office of National Statistics (ONS), the Landfill Tax earned £900m in 2007-8. 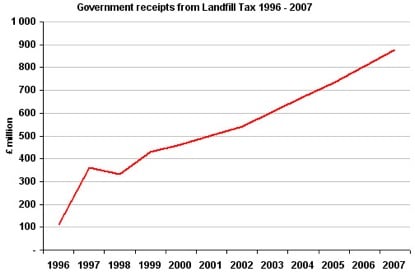 In 2007, the tax on a tonne of rubbish was £24, but the existing £3 escalator was raised to £8 so that the tax on a tonne of rubbish will be £48 in 2010. Under the EU Landfill Directive, local authorities are subject to fines of £150/tonne for exceeding their allowances. This increasing expense has forced widespread and unpopular changes to refuse collection services. Regulation has been one half the story of this sector’s growth. BERR speculated last year that "up to £30bn will need to be invested across the [waste management] sector by 2020" including £5-6bn by 2013 to achieve environmental targets for the disposal of municipal solid waste, "and a further £4-5bn to reach the 2020 target." With a current market value of £11bn, it would be a surprise if £30bn investment, expensive targets and punitive measures over the next 11 years didn’t yield a (roughly) 25% increase in the size of the market. So if 25,000 extra jobs in these sectors are created, it will be at the cost of £1.2m per job. Not bad for the bin men, but terrible for us lumbered with the interest on PFI loans, inadequate refuse collection, and rising council taxes, for no tangible benefit.

Citing Innovas’s report, Secretary of State for Energy and Climate Change, Ed Miliband said that the global green sector is already a three-trillion-dollar industry set to grow by fifty per cent. Agriculture accounts for 4 per cent of the World’s GDP of around $70tn. Is it plausible that the world’s ‘green’ economy is larger than the agricultural economy? These big numbers raise questions about the meaning of 'green'?

"We try to create as wide a definition as possible", says John Sharp, MD of Innovas Solutions, "because that way we can capture the supply chain. We don’t count things like toilet roll and stationery."

But it includes the manufacture, installation, supply, and distribution of battery testing equipment, and nearly the entire chain from development to decommissioning and decontamination of nuclear power stations.