A German evangelical pastor who's recreated biblical scenes from Playmobil figures has been given until 6 April to pull his website, or face the wrath of the company's lawyers. 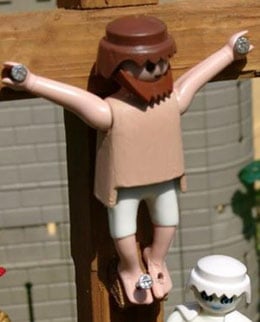 According to the Telegraph, 38-year-old Markus Bomhard's principal sin was to adapt the figures - for example by gluing breasts to Eve and melting Jesus with a hairdryer the better to attach him to a crucifix.

Playmobil said in a statement yesterday: "For private purposes - by collectors and fans - we are very tolerant of this so-called 'customising'."

However, the company described Bomhard's creative adaptations as a "massive manipulation of the figures, for example reshaping their arms with a hairdryer or candle to nail them to a cross".

It insisted: "We can not accept such transformations for safety reasons as our products are made from plastic and are flammable."

Bomhard admitted: "It's true that I did use a hairdryer to soften the figure for the crucifixion scene because the fingers wouldn't spread out properly otherwise. Then I had to let it harden again before I could nail it to the cross."

The pastor defended his efforts by invoking none other that Pope Benny 16, who blessed the initiative in a missive which said: "May your project allow many children and adults access to Holy Scripture."

We at Vulture Central's Playmobil department await the outcome of this spat with slightly timorous anticipation. We'd like to state for the record that we have at no point glued jubs to figures or attacked them with hairdryers.

Mercifully, Playmobil has said it didn't mind Bomhard's recreations, as long as the characters stayed in the original costumes. This is presumably why Playmobible has avoided a strongly-worded parchment from the company's legal representatives until now. ®