We read WiReD, so you don't have to

There was a surprise in the goodie bag for attendees of WiReD UK's launch party. Alongside a copy of the launch issue and a Windows game, was a small bottle of Thunderbird - the fortified wine beloved of students and park bench alcoholics.

Actually - I made the last bit up. There was no Thunderbird. But you'll need something similar - or maybe stronger - to anaesthetise your synapses after trying to read WiReD. After a 12 year absence, the magazine that purports to tell us the future returns to the country that invented the bouncing bomb, the hovercraft, television and the computer.

Well I can think of three or four great reasons why it really should be. The media doesn't do science, and is terrified of technical subjects. The nearest a Hampstead or Islington-based newspaper features editor will get to an engineer is meeting the gas repair man. They consider the vacuous Malcolm Gladwell to be a mysterious, fascinating and wise figure from over the water. Nor do we have, in Britain, a magazine of ideas - just dull collections of position papers written by wonks, for wonks. In Britain we've never had the equivalent of a Harper's or a New Yorker - something with a cracking 15,000 word article that you can read in the bath.

Secondly, this is a time when almost everything is up for grabs. Big ideas in science are furiously contested, and established ideological adversaries are finding strange things in common.

And finally, WiReD has always done optimism quite well - which for all its flippancy and nuttiness, is its redeeming feature. Take Global Warming, for example. Let's suppose it's true, said WiReD: there's no Thermageddon, just a set of technical challenges that don't involve drastic lifestyle or behaviour modification. 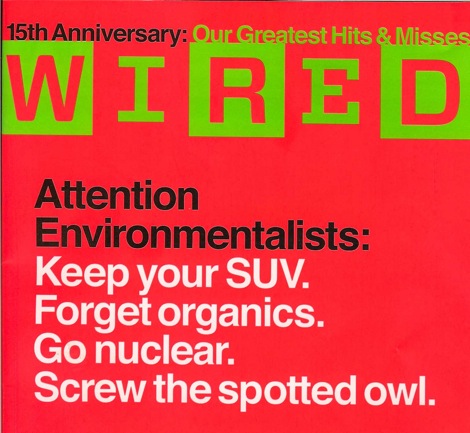 WiReD (US) at its best

In other words - the world is far more interesting than we're told, and there's a gap in the market.

What WiReD gives us instead is 177 pages of relentless infonuggets. The techno trivia submerges both the features and the ads. It starts with the specially commissioned cover, which imagines a futuristic London, with WiReD-sponsored blimps hovering over the city. It predicts "buildings are routinely fitted with turbines and solar panels" and "local trips are taken on an elevated transport network". No, really? The bloke who invented Twitter predicts "I think we'll be bigger than Blogger" in a 150 word interview. Pages are filled with bite-sized futurology predictions which are just as bland - the prediction that we'll find ET in less than twenty years comes from a marketing consultant called Faith Popcorn. (I'm not making this up).

Alain de Botton writes about a day spent driving diggers at the Diggerland theme park. He files just 250 words, and I hope I'm not spoiling it for you when I report the philosopher's key discovery: "It's fascinating to sit at the controls of a digger such as the JCB 3CX... The strength of the digger's arm is awesome".

On to the features, where there's an good idea done well - quant pioneer David X Li, whose mathematical formula powered the last financial bubble. That should have been twice or three times as long. There's a good idea done badly - how Anthony Rose rescued the BBC iPlayer. This should be a cracking tale of a techie who tamed a bureaucracy, but it isn't done justice - you'll learn a lot more from Rose his own words [PDF, 840kb]. And there's a completely wacky feature about "Lifecasting"- in which people record every calorie and particle of food eaten, and every minute of activity in their lives, before posting it on the web. Do you know anyone who does this?

Then there's the four page photo feature of close-ups of a supercomputer's circuitry - and everything's alright again. You wonder - was this published because the pictures are interesting art? (They're not - one page would do).

The choice of experts reflects a media person's idea of cutting edge science - if they'd been cyrogenically frozen in about 1993. You've got neuroscience, represented by Susan Greenfield, and sociobiology, thanks to former Northern Crock chairman Matt Ridley, nephew of former cabinet minister Lord Nicholas and a Dawkins fanatic. Neither is best-placed to explain why neuroscience and sociobiology have been flops.

(Place bets on Stephen Fry "guest editing" in the near future). 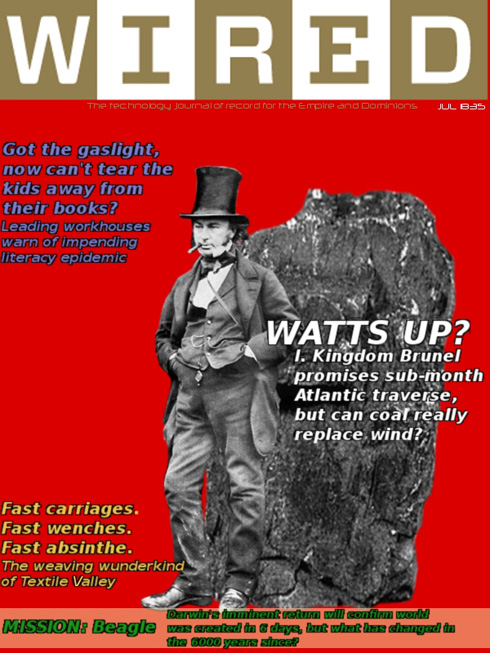 So there, give or take a token music article, you have it. WiReD seems to have acquired a few more handicaps than it had when it closed in 1997. Back then digital networks were quite new. We weren't sure if cack-handed politicians would try to close the whole thing down, egged on by a sensationalist press. Now it's the press and the politicians who occupy the utopian highlands of what was once WiReD country - whether it's Andrew Gowers burbling about the economic potential of Web 2.0, or the Daily Telegraph Twittering.

So the quest for big ideas means embracing daft ones. Enter Chris Anderson, with The Long Tail and Freetardonomics.

This leaves WiReD in a peculiar time warp - in both tone and content. What should be absorbing - maybe even mind-blowing - looks tentative, defensive and nervous. The editorial execs - who seem to be passing through here, between jobs - appear to take no interest in science or technology. Without the confidence of the original, it looks like a small blog given a big budget.

I'd love to report otherwise, but at this rate, WiReD UK is going to inspire a whole generation of British schoolchildren ... to become chartered accountants. ®